Thorpe Park's planned new attraction for 2011 has been revealed as a Spinning Rapids water ride, which will be relocated from the closed Cypress Gardens park in Florida.

Known as Storm Surge at its former home, the family ride sees guests boarding rubber rafts which can hold up to 6 people. The rafts are carried up a conveyor belt to the top of a 19.4 metre-tall hill, before being propelled by water down a spiral chute. Panels on the surface of the waterway cause the rafts to spin as they make the descent, before splashing down into a channel at ground level.

Details of the new attraction were revealed in a planning application submitted to Runnymede Borough Council, in which the park describes the ride as a "secondary attraction" designed to relieve queues for its headline attractions. The water ride will be added instead of 2 of the 3 flat rides which were proposed in medium-term plans submitted to the council in 2005.

A schematic view of the Spinning Rapids attraction.Image © WhiteWater West

Manufactured by Canadian-based waterslide specialist WhiteWater West (who also built Thorpe Park's Depth Charge attraction), Spinning Rapids rides are in service in parks around the world. In Europe, heavily-themed versions are in place at Parc Asterix in France (L’Oxygenarium) and Hansa-Park in Germany (Rio Dorado). Despite appearances, the rides are designed not to get riders wet - although Cypress Gardens added water features towards the end of Storm Surge to give guests a mild splash. 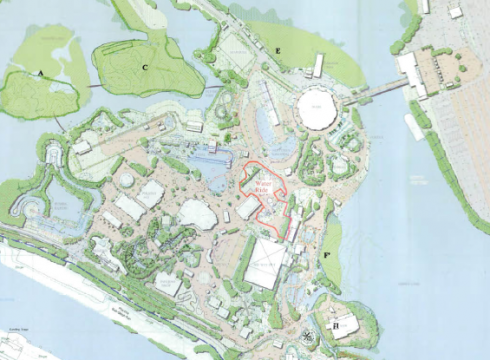 The Spinning Rapids ride will be located in the centre of the park (outlined in red).Image © Thorpe Park

The attraction will be located close to the X:\No Way Out rollercoaster in the central area of Thorpe Park currently known as the Octopus Gardens. The 7 "kiddie" rides that currently occupy the area will be removed to make way for the rapids ride, with new landscaping set to be added around the ride's queue area. Although much of the ride's steel structure and glass-reinforced plastic chutes will be directly transplanted from Cypress Gardens, the ground-level "river" sections will be made of concrete. 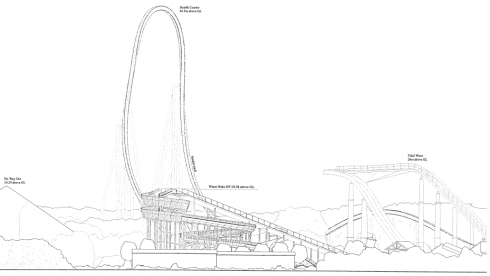 The Spinning Rapids ride will be less tall than nearby Stealth and Tidal Wave.Image © Thorpe Park

It is not yet known whether the new ride will be themed as part of one of Thorpe Park's existing "lands" (such as neighbouring Amity), or whether a new themed area will be introduced. In its planning application, the park says that the kiosk and pumping station buildings constructed alongside the ride are likely to "themed in a similar way to other buildings located within the core of the park". 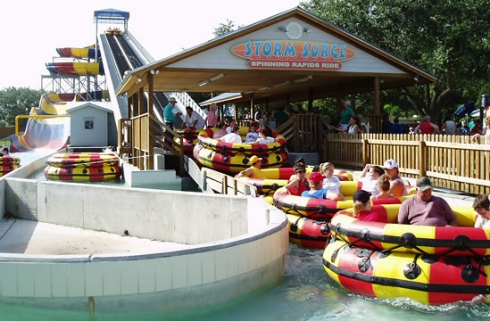 Storm Surge had been located at Cypress Gardens since 2004. The bankrupt park was purchased by Thorpe Park owner Merlin Entertainments Group earlier this year, and will reopen as Legoland Florida in 2011. A number of other rides are to be dismantled and removed from the park, including the Starliner wooden rollercoaster.

A detailed review of L'Oxygenarium, Parc Asterix's Spinning Rapids ride, can be found at Coaster Kingdom.

Thorpe Park plans to add five new rides between 2011 and 2016, in addition to 2 new rollercoasters (which are currently planned to open in 2012 and 2015). The park recently detailed its Medium Term Development Plan in an extensive series of documents submitted to the council. A full breakdown of the planned upgrades can be found in our in-depth analysis of Thorpe Park's plans for 2010-2016.

Looks like a great central attraction. Those ground based rides always seemed popular for kids, hopefully they'll be relocated. But bringing the water theme further into the front of the park is great. Seen some good vids of this ride in action, yay thorpe park!