Disneyland will celebrate its 55th anniversary on Saturday, July 17, with the park planning to mark the occasion with a number of special events and limited-edition merchandise.

Guests visiting Disneyland during the anniversary week will receive special anniversary edition park maps, while cakes, cupcakes and candy packaging will also feature 55th anniversary branding. On the anniversary itself, the park will hold a special dedication ceremony at noon in Town Square, followed by a rendition of "Happy Birthday" by Cast Members at 4.15pm. The park will also host a special arts and collectibles event at The Disney Gallery from 9-11am.

On Saturday only, guests will have the opportunity to buy "premium" Mickey Mouse ear hats featuring the embroidered slogan "D 55th – July 17, 2010", while annual passholders will also be able to receive free "basic" embroidery on ear hats on Saturday only.

Dooney & Bourke has produced a special collection of handbags to celebrate Disneyland's anniversary. The bags feature iconic images from Disneyland's first 55 years, such as silhouettes showing the evolution of Mickey Mouse and park tickets from different time periods. Disney Vault 28 will be the first to offer the bags, with a special appearance from Ian Ray of Dooney & Bourke scheduled for the Disney Vault 28 store in Disneyland's Downtown Disney District on July 17 from 2-4pm. 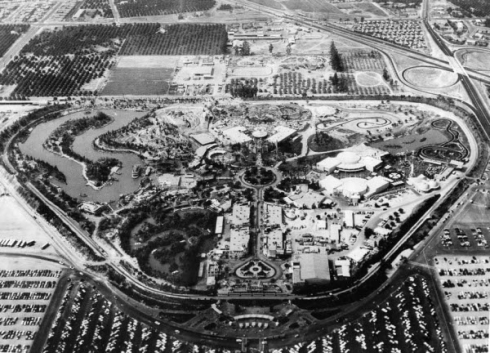 An aerial view of Disneyland in 1956, one year after opening. Source: Wikipedia

The anniversary marks 55 years since Disneyland's infamous "International Press Preview" event on Sunday, July 17, 1955. Although the event was invitation-only, the wide availability of counterfeit tickets enabled an incredible 28,154 people to attend a park which had just 20 attractions at the time. On top of this, a plumbers strike caused many of the park's drinking fountains to dry up, causing some guests to protest that Disney had deliberately switched the fountains off to encourage sales of Pepsi (who sponsored the park's opening).

On top of the plumbing issues and overcrowding, the tight timescales for the construction of Disneyland meant that some areas were barely finished. Asphalt in some areas was so soft that high-heeled shoes sank into it, while a gas leak in Fantasyland forced many of the ride's attractions to close for the afternoon. The debacle was broadcast live on ABC television, and became known internally as "Black Sunday". For at least a decade after the event, Disney refused to acknowledge it as the opening day - celebrating July 18 (the anniversary of the official public opening) instead.

Despite the difficulties on the media day, Disneyland went on to become hugely successful and spawned similar parks in Florida, Tokyo, Paris and Hong Kong. It is still the second most popular theme park in the world, with 15.9 million people visiting in 2009.