LEGOLAND Windsor has submitted plans for a new attraction dubbed Project Atlantis, which will combine a dark ride with Sea Life marine exhibits in a unique new concept.

Fan site Completely LEGOLAND Windsor spotted the detailed planning application for the ride, which was submitted by LEGOLAND to the Royal Borough of Windsor and Maidenhead. Meanwhile, LEGOLAND's website describes a "groundbreaking attraction" as due to open in 2011. 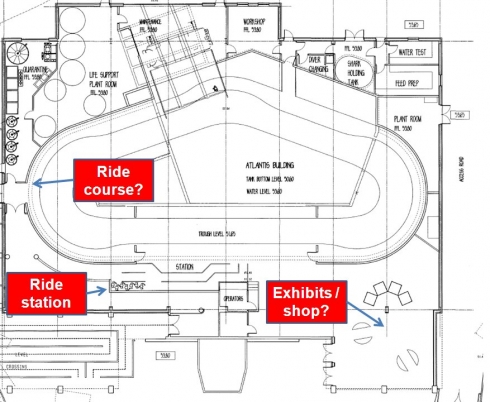 The ride system itself consists of 8 vehicles which travel on rails in a loop around the inside of a building. According to LEGOLAND, the system is in use at a park in California, although it is not known which one. Riders will be accompanied by an on-board audio system as they pass numerous marine exhibits and a LEGO recreation of the lost city of Atlantis, which will be "guarded" by live sharks.

LEGOLAND reveals in its supporting information for the planning application that the ride building will house a one million litre tropical fish tank, touch pools and other interactive areas. This suggests that the ride will be accompanied by walk-through sections, with the plans appearing to show these being located at the end of the ride itself close to the building's exit.

LEGOLAND Windsor hopes to locate Project Atlantis in a new building on the site of the picnic area between Dino Safari and Dino Dipper - with the latter being relocated. The building's facade will be themed to reflect the ride's Atlantis theme, with a pyramid forming its centrepiece. The water tanks will be housed underground in order to enable the building's elevation to be reduced, increasing the chances of the plans being approved.

Project Atlantis will share its theme with an existing attraction at Denmark's LEGOLAND Billund. The Danish version differs from the the proposed attraction at LEGOLAND Windsor, in that it does not include a dark ride transit system. Instead, riders watch a pre-show on-board a "submarine", before walking through a number of marine exhibits including a large underwater tunnel.