Stars of the Harry Potter movies have been touring Universal's Wizarding World of Harry Potter this morning, as excitement builds ahead of its grand opening on June 18.

Robbie Coltrane, Matthew Lewis, Emma Watson, and Oliver and James Phelps all visited Islands of Adventure to see the $200 million recreation of Hogsmeade, which has been open for employee previews every night this week. However, the Wizarding World's headline attraction - Harry Potter and the Forbidden Journey - has not been operational during the previews. 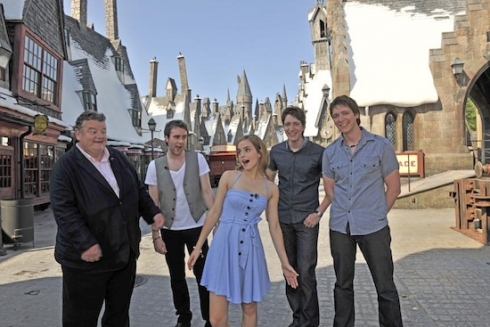 A public soft opening of the new land is very likely ahead of its grand opening, as Universal will be keen to ensure that its attractions are operating smoothly ahead of the inevitable influx of guests. However, public previews of the Forbidden Journey are unlikely to occur until it has been tested in action by Universal employees. Last year's opening of the Hollywood Rip, Ride, Rockit rollercoaster saw employee testing and a public soft opening occur within a day of each other, although the ride's late opening (some two months behind schedule) may have contributed to a compressed timescale.

Anticipation from fans ahead of the opening of the Wizarding World is reaching fever pitch, with new details leaking out daily from employees and members of the media who have been able to tour the area's streets, shops and restaurants. We've rounded up some of the best reports below: