Two people were trapped upside for around twenty minutes on Flamingo Land's Mumbo Jumbo rollercoaster when a poncho got caught in the ride's wheels on Sunday.

The riders were left stranded some 50ft above the ground during the incident at 5.30pm on May 2, before being safely evacuated without injury. One of the riders had been wearing a poncho which became entangled in the ride's wheels, causing the ride's safety systems to bring it to an emergency stop. A second car, with three riders aboard, stopped at a brake section. 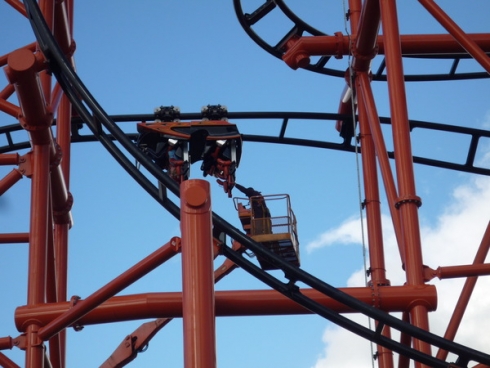 The incident attracted a crowd of onlookers, one of whom captured the above image and posted it on the Twitpic service. It shows operations staff from Flamingo Land carrying out the successful rescue operation.

Flamingo Land executive Elliot Richards insisted the ride's safety systems had functioned correctly and praised the response of staff. He said: "As a result of these circumstances, Flamingo Land implemented its Evacuation and Rescue Procedure. All five riders were successfully evacuated without injury in quick succession, due to the speedy response of the Flamingo Land Operations Department."

Mumbo Jumbo was built at a cost of £4 million and made its debut in July last year. It is the steepest rollercoaster in the world, featuring a 96 feet, 112 degree drop.

That dude was an idiot taking a poncho on a rollercoaster.

All this does is shows that Mumbo Jumbo's safety features work extremely well. Game on!

I don't feel bad for that dude at all... he brought the poncho onto a rollercoster. Good job by the park staff.