Six Flags America has revealed details of its Thomas Town expansion, which will be the largest Thomas-themed area in North America when it opens in summer 2010.

As previously rumored, Six Flags America's take on the Thomas Town concept is the most ambitious yet, featuring 8 new rides and attractions and covering three-and-a-half acres. It is the largest expansion at the Maryland theme park in over a decade, and like other Thomas Towns around the world will be targeted at younger children.

Thomas Town will be themed around Thomas' mythical home on the Island of Sodor, and will be located between the Superman: Ride of Steel, Joker's Jinx, and Wild One rollercoasters. The area's attractions are all themed around characters from the Thomas the Tank Engine books and TV shows, and many of them have been seen in various guises at other Thomas Towns such as the one at Drayton Manor in the UK. 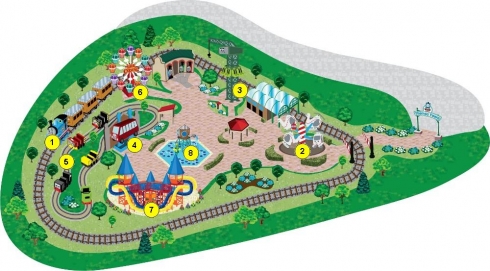 Marked on the map above, the Thomas Town attractions include:

In addition to the rides, a new character will be added to the park to meet and greet visitors. "Sir Topham Hatt" - who will be better known to older readers as "The Fat Controller" - will be available for photo opportunities throughout the day. Meanwhile, The Knapford Station Shop will sell Thomas-themed merchandise including storybooks and die-cast trains. 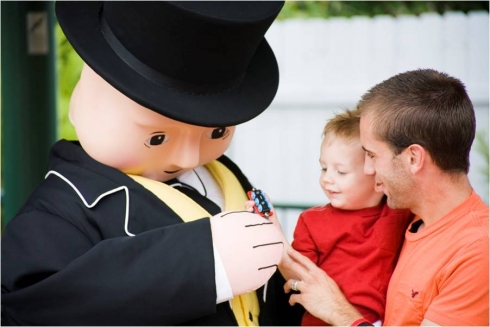 Six Flags America's Thomas Town will be the fifth to be built at a Six Flags park, and represents another long-standing children's franchise establishing itself in the theme park arena after Cedar Fair's recent Planet Snoopy conversions.

Park President John Winkler said in a statement "Thomas & Friends have entertained and educated more than three generations with messages of teamwork and friendship. Now families who visit the park will have a new, permanent, place - the largest in North America - to enjoy and interact with these wonderful characters."

Six Flags America's season begins on March 27, 2010 although the park is yet to confirm a firm opening date for the Thomas Town expansion. The park's Season Pass features in TPT's list of the best-value Six Flags annual passes.

More images and concept art for Six Flags America's Thomas Town attractions can be found in our gallery.