The trains for Alton Tower's upcoming Thirteen rollercoaster have been revealed in images and video released on the ride's official blog.

The train is shown in promotional materials for the park's Ultimate Fan contest, the winner of which will be among the first riders on Thirteen. Although the picture does not reveal much about the design of the new ride, it does suggest that riders will be secured by lap bars rather than shoulder restraints. The video also features a glimpse of the ride's station, and is embedded at the bottom of this story.

The look of Thirteen's trains is consistent with other images released of the ride so far, with the "Dark Forest" theme to the fore. Creeping branches can be seen attached to the train, which has an industrial look. This is similar to the updated theme of nearby Rita: Queen of Speed, images of which were featured on TPT earlier this week. 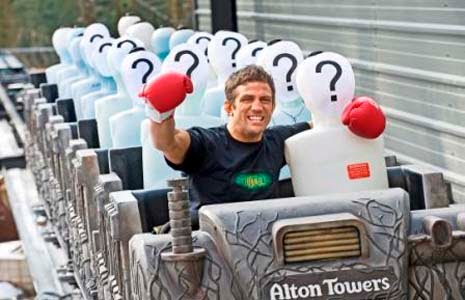 The industrial style of the trains supports previous speculation that Thirteen's storyline will be based around workmen disturbing a mysterious "crypt". The plot is also likely to link into the mythology behind Alton Towers itself, as is the case for the park's other supernatural-themed attraction, Hex: The Legend of the Towers.

Alton Towers is yet to confirm full details of Thirteen's plot, but following the release of the Rita images rumors have centred on a plot that would tie the two coasters together. This would be based on the owners of the Rita "race track" attempting to expand, only to uncover the crypt that forms the centrepiece of Thirteen.

To support the park's claim that Thirteen will be "the scariest rollercoaster in the world", the competition to be part of the first ride on Thirteen is based on a gruelling set of tests. To become the winner, entrants must face psychometric testing, interrogation interviews, an one-hour "rollercoaster endurance test" on Air, plus a mysterious "midnight bootcamp".

The winner of the competition will be decided by a panel of "experts", including Celebrity Big Brother winner Alex Reid. Alton Towers will be accepting entries via its website from midnight on Wednesday, February 3 and the event itself is expected to take place on March 2-3 at the park.

Thirteen is set to open on March 20, with construction of the £15 million rollercoaster at an advanced stage. Alton Towers has promised that the Intamin-designed coaster will contain a "world's first" element, rumored to be either a section of track that "freefalls" vertically, a backwards-tilting section - or a combination of the two.

The centrepiece of the attraction's theming is a 14-metre tall tree, partially built with steel from the park's famous Corkscrew rollercoaster, which Thirteen replaces. Alton Towers has claimed that the ride will be so terrifying that it will restrict guests to one ride per day and only allow those aged 16-55 to ride.

Theme Park Tourist will be attending the opening day of Thirteen in March and will bring you exclusive video and photographs from the event.