Alton Towers has begun updating its Rita: Queen of Speed rollercoaster to ensure that it fits with the "Dark Forest" theme of Thirteen, which will open in March.

New pictures released on Alton Towers' Flickr site suggest that much of Rita's original "race track" theming will remain, but that it will be updated to appear as though the Dark Forest has "engulfed" the site. The tyre which forms the main entrance to Rita's queueline has been covered in vines, while "grasping" tree branches have also been added to the Control Cabin at the ride's station.

The updates appear to signal the end of the caveman-themed Ug Land area of the park, which housed Rita and the Corkscrew prior to the latter's removal last year. Rita's old "Thunder Rock Rally" signage has been removed, and it appears the new theme will be based around a derelict race track that has been taken over by the forest. 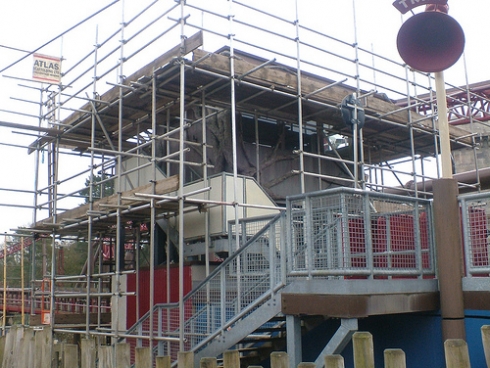 Rita is being taken over by the Dark Forest as Alton Towers' new land nears completion. Image © 2010 Alton Towers

Alton Towers is yet to confirm the over-arching story behind Thirteen. Following the release of the Rita images there is speculation that it will be based around the owners of the Rita "race track" attempting to expand, only to uncover the crypt that forms the centrepiece of Thirteen. The plot is also likely to link into the mythology behind Alton Towers itself, as is the case for the park's other supernatural-themed attraction, Hex: The Legend of the Towers.

Thirteen is set to open on March 20, with construction of the £15 million rollercoaster at an advanced stage. Alton Towers has promised that the Intamin-designed coaster will contain a "world's first" element, rumored to be either a section of track that "freefalls" vertically, a backwards-tilting section - or a combination of the two.

The centrepiece of the attraction's theming is a 14-metre tall tree, partially built with steel from the park's famous Corkscrew rollercoaster, which Thirteen replaces. Alton Towers has claimed that the ride will be so terrifying that it will restrict guests to one ride per day and only allow those aged 16-55 to ride.

Theme Park Tourist will be attending the opening day of Thirteen in March and will bring you exclusive video and photographs from the event.