The classic Big Dipper rollercoaster at Blackpool Pleasure Beach is set to return in 2010, after the park invested £500,000 in upgrading the ride's station.

The wooden coaster, which was built in the 1930s, has been closed since an incident last August which saw 21 passengers taken to hospital. The Health and Safety Executive (HSE) launched an investigation into the incident, with the results yet to be made public.

However, the park's blog reveals the upgrades to the station, which will add a new fountain and updated murals. The station's tower and dome have also been renovated, in an effort to preserve the spirit of the original 1930s station design. The investment in the station would seem to indicate confidence from the park that meet any requirements from the HSE to upgrade safety systems on the ride. It is not yet clear whether the ride will return in time for the start of the 2010 season on February 13. 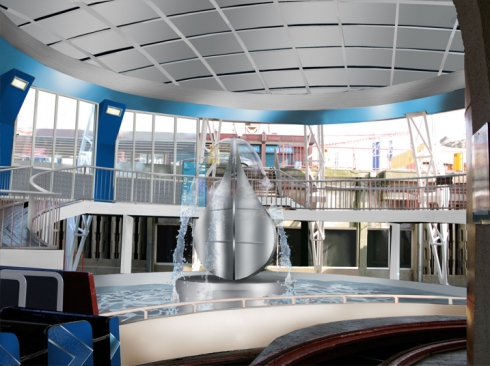 The Big Dipper's new station - the coaster itself can be seen at the bottom of the image. Image © 2010 Blackpool Pleasure Beach.

Last year's accident on the Big Dipper occurred when two trains collided after the first train came to a stop on one of the coaster's hills. 21 passengers were taken to hospital, most with minor injuries, and firefighters scaled 20ft to free the trapped guests. The family of two children involved in the crash has since pledged to sue the park.

Blackpool Pleasure Beach is investing some £2.25 million in upgrades for the 2010 season, much of which has been spent on a new entrance to the park. This will add a new ticket centre (selling entrance tickets and ride wristbands), new turnstiles and a new sculpture garden located just inside the park.

Also new for 2010 is an updated Dodgems ride. It will be located beneath Irn Bru Revolution, and will feature Italian-designed cars with a "contemporary" look.

The park is also set to add a Twist 'n' Splash attraction for the 2011 season - potentially becoming the first park in the world to add the new Mack-designed ride. Full details can be found in TPT's recent news story.