Universal Studios Japan has revealed the name of its new indoor rollercoaster as Space Fantasy: The Ride, with the attraction set to open on March 19, 2010.

The park's website reveals that the ride will feature trains with four two-seater spinning cars, meaning that it is almost certainly a Mack spinning coaster (as shown here). The $55 million attraction will replace E.T. Adventure, which closed last year.

As previously revealed, Space Fantasy: The Ride will be themed around a flight through the solar system. A pre-show will see riders welcomed by G-Bot, a friendly robot who appears to also act as a "communications satellite". They will then meet the ride's key character, Solar Princess Kosumia, "Princess of the Sun" - who is on a mission to protect the galaxy.

Kosumia reveals that the sun is losing energy, and that the only way to restore it is to use human energy. She asks guests to accept a mission to fly aboard a "solar shuttle" to help the save the galaxy, and (assuming they accept) they then hop into the 2-person spinning coaster cars. During the journey, they will see the Earth itself from space, before navigating through Saturn's rings, passing through a meteor shower, heading towards Mercury and finally reaching the other side of the sun before returning to earth. The spinning action of the coaster cars will "release" the energy needed to restore the sun to health. 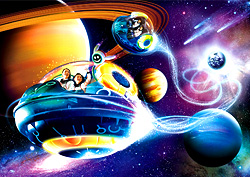 The coaster itself is around 1,920 feet (585 metres) in length, and reaches a height of 62 feet (19 metres). As with all Mack spinning coasters, the cars will spin individually, and Universal claims that the speed and number of spins will change every time. Mack's technology provides the ability to include both pre-programmed turns of the car (which should come in useful for showing off the space scenery) and free-spinning sections with random patterns.

Housed inside the former E.T. Adventure building, Space Fantasy: The Ride will reproduce the solar system using video and audio technology along with physical "sets". The cars will also be equipped with video screens, from which G-Bot will take part in the story and "communicate" with riders.

The new attraction from Universal is sure to draw comparisons with Space Mountain at Tokyo Disneyland, given that both are indoor rollercoasters featuring a space travel theme. While the ride systems in use and storylines are significantly different, it seems Universal is looking to compete head-on with Disney with Space Fantasy: The Ride.

Mack spinning coasters are already in place at Europa Park (Euro-Mir) and Knott's Berry Farm (Sierra Sidewinder). Europa Park's version features controlled spinning, whereas Knott's Berry Farm's attraction was the first of the new generation which allows free spinning for each car in the train.

The experience on Space Fantasy: The Ride should be very different to the existing Mack spinning coasters. It will be the first indoor rollercoaster in the world to feature multiple spinning cars in a train, and Mack has also unveiled some new features for its coasters, including the ability to add magnets to the track to create additional spinning sections.

Space: Fantasy: The Ride will be sponsored by NTT DoCoMo, and features at number 9 in Theme Park Tourist's list of the 10 most exciting new theme park attractions opening in 2010.