Lines is available for iPhone, Blackberry, Android and Palm webOS smartphones and can be accessed through the device's web browser at https://m.touringplans.com/. It is currently free to access as part of a beta period, but is likely to be a paid-for service in future.

Rather than display actual wait times, Lines displays estimates based on historical data and user-submitted wait times. It uses the same underlying data and technology that is used to generate the optimised touring plans that are featured in the Unofficial Guide to Walt Disney World. The application's developers are hoping to gain an understanding of how accurate its estimates are during the initial trial period. 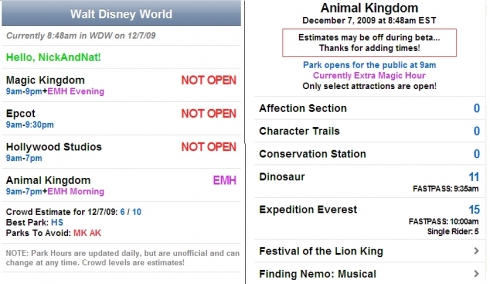 In addition to wait times, Lines also provides estimates of crowd-levels at the park on any given day, and when FASTPASSes for a particular attraction will run out. More basic data, such as details of planned ride refurbishments and park hours are included, while users are able to report unplanned attraction closures.

A growing number of mobile applications are emerging to provide information to users while they tour theme parks. Disney recently released its subscription-based Mobile Magic application for Verizon Wireless subscribers, which provides attraction information, wait times and navigation around Disney parks. Rival Universal Studios Hollywood recently launched a similar application for iPhone and Android smartphones, although it was only available during Universal's Halloween Horror Nights events.

I agree that wait times are most important but I think information about when Fastpass will run out would be really useful as there is nothing more annoying than walking all the way over to a ride only to find fastpass has finished and there is a 80 minute queue.

It is definitely the way everything is going and I think it will make it easier for you to navigate around the parks. The best thing will be advice on wait times as that is the main thing that holds people up and annoys them.