Kuka Robotics has announced that its RoboSim 4-D Simulator ride system will be used for the upcoming Sum of All Thrills attraction at Epcot.

The Sum of All Thrills will allow guests to design their own rollercoaster, jet plane or bobsled ride. They'll then be able to "ride" it on one of the RoboSim 4-D Simulators. It will be the first ride to be located in the Innoventions pavilion at Walt Disney World's Epcot.

No opening date has been confirmed by Disney, although there were reports last month that the company has begun to recruit Cast Members to operate the ride. Raytheon, who will sponsor the Sum of All Thrills, have also launched a contest to win a trip to the ride's ribbon-cutting ceremony.

The photo below shows the system that will be used, with guests seated on a robotic arm that was originally designed for industrial use. A similar arm is also set to be used for the Harry Potter and the Forbidden Journey attraction at Universal's Wizarding World of Harry Potter when it opens in 2010 - though the Epcot version will be stationary, unlike the Potter ride which will also move along a track. 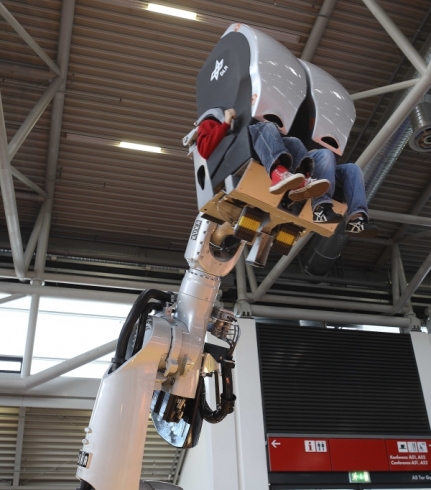 A YouTube video of the ride system in action is embedded below, though this is not the exact installation that will be seen at Epcot.

Like many attractions at Epcot, The Sum of All Thrills has an educational theme. In this case, it is part of Raytheon's MathMovesU program, which is designed to engage middle school students in math and science. The experience is designed to show that basic skills picked up at school can be applied to stunning engineering feats such as rollercoasters.

The new ride may sound familiar to Disney-goers, as CyberSpace Mountain at the DisneyQuest "indoor theme park" allows guests to design a rollercoaster before boarding a simulator to ride it. However, the RoboSim 4-D should offer a very different experience to the pitch-and-roll simulator used in the existing attraction.