The Twilight Zone Tower of Terror At Walt Disney Studios

Opened just in time for Christmas 2007, The Twilight Zone Tower of Terror visually dominates Walt Disney Studios. It is housed in a full-scale recreation of a 1930s-era Los Angeles hotel, dubbed the Hollywood Tower Hotel, and places guests into the middle of an episode of The Twilight Zone.

After queuing through the hotel’s grounds and into its lobby, guests are sent into one of four virtually identical “libraries”. There, they watch as the late Twilight Zone presenter Rod Serling (voiced by an impersonator) introduces the ride’s plot: a Hollywood couple entered one of the hotel’s elevators during a storm, and disappeared into the Twilight Zone, never to be seen again.

Guests emerge into the hotel’s basement, where they are divided into groups and board one of its service elevators. Seated and strapped in, they rise to a mid-level, where they see a ghostly representation of the missing hotel guests beckoning them into the Twilight Zone. The elevator then races to the top of the hotel, offering a quick peek out over Walt Disney Studios before plummeting towards the ground below at speeds that are faster than freefall. The elevator then rises and drops again several times, before guests emerge into the post-ride shop.

The Walt Disney Studios version of the Twilight Zone Tower of Terror is a clone of version at Disney California Adventure. In fact, this version was originally designed for the park in Paris, but financial problems caused its opening to be delayed for several years. The original ride, which opened at Disney’s Hollywood Studios in Florida in 1994, features an additional section in which the elevators leave the shaft and enter one of the hotel’s floors, but this was removed to increase the reliability and capacity of subsequent versions. 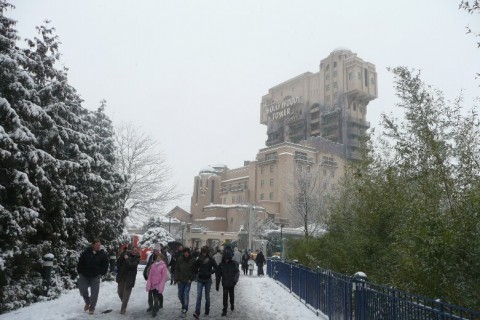 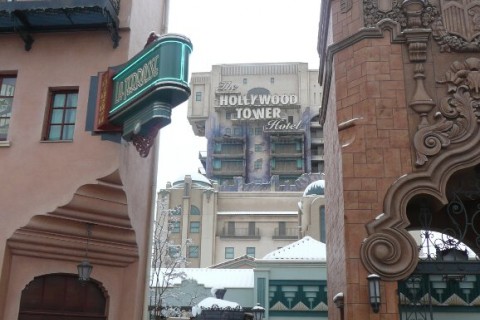 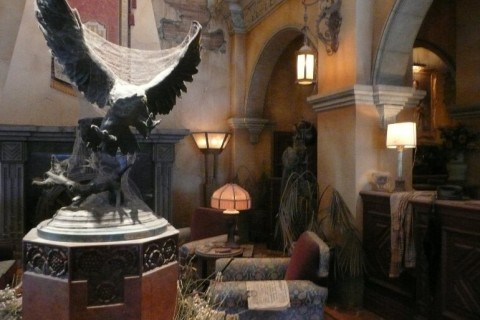 An amazing ride not to be missed.

If there is one ride you cannot pass up on a trip to Disney it's Tower of Terror. This ride is an amazing and powerful contraption that will thrill you on every ride.

Starting in the lobby of the hotel you make your way into the pre show area where the story is set up via a video played on an old TV in the corner of the room (spoken in French with English subtitles). From here its into the basement of the hotel to await your lift in the service area. This part of the ride is incredibly themed and really sets the atmosphere for what lies ahead.

Our Bell Hop was excellent and really got into character when speaking to us when we boarded. I wont spoil the ride sequence for those that haven't been on it but I'll just say that you should try your best to not hold on! On returning to the basement our Bell Hop greeted us with a sinister smile much the the amusement of all onboard our elevator.

Either hit this ride during a parade or get a fast pass for the shortest queue time.