Rock ‘n’ Roller Coaster is a high-speed coaster housed entirely indoors. As its name suggests, the ride features a musical theme, and guests queue past a range of rock ‘n’ roll memorabilia. Before boarding the coaster’s trains, they enter a mock recording studio, where the ride’s stars, ageing rockers Aerosmith, introduce the experience.

The central element of the coaster is its launched start, which blasts guests from 0 to 57 miles per hour in just 2.8 seconds. The remainder of the ride takes place in near-darkness, with guests traversing a number of inversions and sharp turns. Aerosmith tunes accompany the journey, blaring out through an on-board audio system (each of the coaster’s 5 trains plays a slightly different selection of the band’s hits).

The ride itself is identical to its namesake at Disney’s Hollywood Studios in Orlando, although the storyline is slightly different. Whereas the Florida version sees guests racing across town to try and get to an Aerosmith gig in time, the plot at Walt Disney Studios revolves around the band designing a prototype of a new roller coaster. 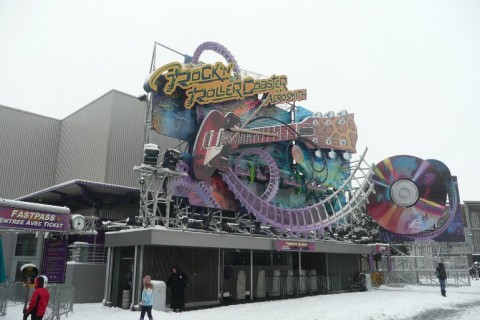 Sorry, there are currently no reviews for Rock 'n' Roller Coaster Starring Aerosmith .