Walt Disney Studios' Ratatouille dark ride, based on the 2007 Pixar film of the same name, will see guests "shrunk" down to the size of a rat. The ride will begin in Gusteau's restaurant, before taking riders on a wild chase through key scenes from the movie. Disney will reuse the trackless ride system from Tokyo Disneyland's Pooh's Hunny Hunt attraction, which allows full 360 degree rotation of the ride cars. 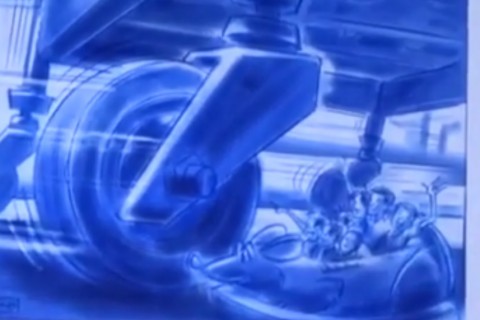 Submitted by Anonymous (not verified) on Tuesday, October 14, 2014.

Having gone some four years since last visiting Disneyland Paris, my nearest Disney resort and one close to my heart since it was the first I visited when I was just six, and two since visiting any Disney Parks anywhere (Walt Disney World), I decided the much-hyped launch of Ratatouille l'Attraction (the ride goes by at least three official names, l'Attraction is a decent balance between French authenticity and brevity) was as good an impetus as any to get me back. I ultimately decided on a Day Trip for my birthday in mid-October. A day trip is a risky way to try and experience a hot new attraction, but I hoped the off season Monday my birthday fell on would help alleviate that.

As it turns out, there is no stopping the buzz of a hot new ride, especially at a relatively modest park like Walt Disney Studios: within 30 minutes of park opening there was a queue snaking all the way up the run down to Place de Remy from the rest of Toon Studios - both for the ride and Fastpass distribution, neither of which appeared to have opened yet. So I retreated to quickly ride Crush's Coaster, the park's nearby fellow guest sponge (since it still - unaccountably - lacks Fastpass) using the Single Rider line. When I returned, still only a little more than an hour or so after opening, the Fastpass window had already reached nearly 5PM. I wound up with a FastPass for between 17:00 and 17:30. A long wait, but I was going to be around all day anyway and at least I was able to spend more of my precious day trip time on attractions rather than in the queue.

As it turns out, the late ride time was a good thing for another reason. Disneyland Resort Paris has some well known financial burdens which are now being addressed by The Walt Disney Company. But for now, there are any number of show standards issues and other minor disappointments caused by cost-savings. It's still a great Resort, but the coming improvements will be welcome in that they should make it a great DISNEY Resort too. Had I rode Ratatouille before seeing the rest of the Parks, the minor issues might have stood out far more because...Wow.

Ratatouille is phenomenal. The ride is funny, charming, exciting (not thrilling as such, but with far more action and motion than a more traditional dark ride for sure) and a visual spectacle. Like other rides that integrate screens with physical environments (Harry Potter and the Forbidden Journey, The Amazing Adventures of Spider-Man), the screens are used to link the various themed environments and introduce elements that would be impractical to create physically. But Ratatouille trumps these other similar rides by offering a far more cohesive story - certainly more complete and comprehensible than The Forbidden Journey. This is not a disjointed romp through major scenes from the movie. The scenes have been fitted into a self-contained condensed version of the movie's plot rather than a strange pseudo-alternate universe 'best of' compilation.

Also impressive is that it manages to achieve this cohesion despite needing to comply with the need to present the attraction simultaneously in French and English. The standard trick to deal with this at DLP is a call and response system where one character speaks exclusively French and another converse with them in English in a way that exposits what was said. This is fine, but the French setting of Ratatouille has allowed the writers to employ a more elegant solution. Remy switches between French and English phrases, as do other characters, in a way that makes sense (the characters are French, and are speaking English as well in deference to us as Guests, possible because the attraction's story acknowledges our presence). This means the ride can avoid the disappointment of you being unable to understand anything your favourite character says without the suspension of disbelief that comes with them unaccountably repeating themselves in French for no reason. It's clever, though of course the subject matter helped. Still, there was some skepticism about this French theme being employed in France and this goes some way to explaining why those concerns are not as important as first thought.

With all that said, the reduction in thrills compared to the likes of Harry Potter and Spider-Man necessary for making this a truly family attraction may disappoint some. One offset to this is the novel ride system. The unpredictable yet unfailingly smooth system is a true marvel, and that unpredictability definitely adds to the excitement factor.

There are a number of neat touches among the practical effects too. Most notably, the oven and a scene involving a bottle of Champagne are suitably delightful.

Ratatouille is definitely a show stopper for Walt Disney Studios and almost certainly for the whole Resort. It is not to be missed. Hopefully its success, coupled with the financial bailout coming from The Walt Disney Company, will spur EuroDisney to improve other attractions to narrow the gap. But it will likely remain the Resort's best ride at least until another new E-Ticket is built anyway. It is good enough to be considered an international draw, aided by the fact it is truly unique. You have got to try this ride. It is jaw-dropping.