CLOSED. CineMagique remains closed despite several rumours of a re-opening. At present (late 2019) there is no further information. Completely unique to Walt Disney Studios, CinéMagique used a combination of live action and spliced-together footage from classic movies to celebrate the history of cinema. It was housed in a large theatre that can hold up to 1,100 guests, and performances took place at scheduled times throughout the day.

The storyline featured actor Martin Short (or, at least, a lookalike) emerging from the audience and being sucked into a black-and-white movie showing on-screen. After meeting, and falling for, Julie Delpy, the character raced through a series of recognisable movie scenes in search of his mobile phone.

The two love-struck stars were edited into sequences from movies such as Star Wars, The Magnificent Seven, Mary Poppins and The Wizarding of Oz. 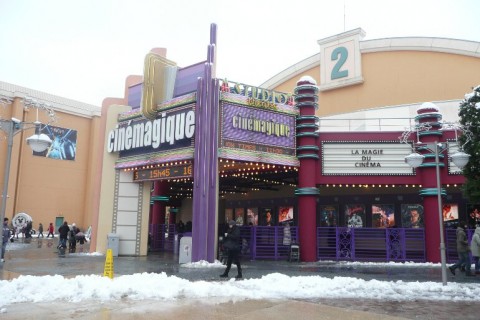 See all photos of CinéMagique - CLOSED

Submitted by SparklinDiamond on Monday, October 21, 2013.

Having just watched animagique before watching this I thought it couldn't be beaten. I was proven wrong. Cinemagique is utterly unique, I have never seen anything like it and I doubt you ever will. It incorporates live actors, and a variety of different movies from all eras. The eldest to the youngest will find at least one movie that they recognise and that's what makes it a family favourite show. So clever.