Suspended from above and strapped onto a bicycle with E.T. at the helm, this attraction created specifically for Universal Studios sees guests racing from the police, flying above the city streets, and finally landing on E.T.'s never-before-seen home planet. 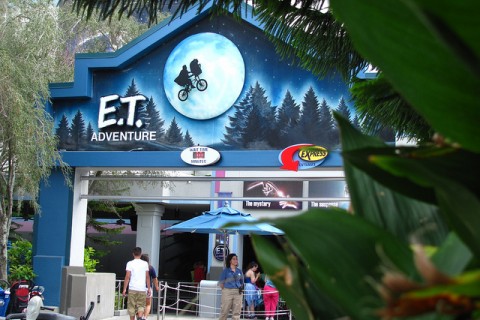 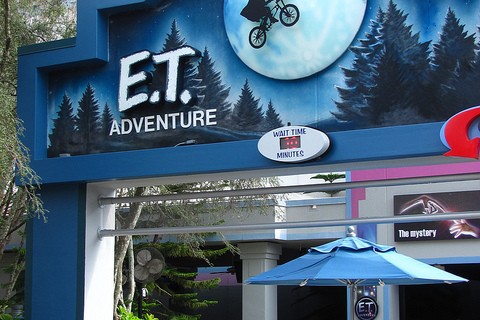 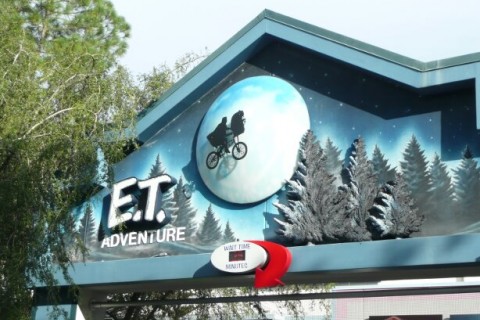 See all photos of E.T. Adventure

Sorry, Disney apologists, but it's better than Peter Pan's Flight...

Submitted by Anonymous (not verified) on Saturday, October 26, 2013.

The legendary director of E.T., Steven Spielberg personally addresses you to help E.T. on a mission: his planet is dying, and it is your responsibility to get him back home. When you enter, you are given an interplanetary passport (Courtesy of the Men in Black, I assume?)and you give the team member your name. Your vehicle is a cluster of bicycles, complete with E.T. in the front milk crate basket. As you may have guessed, you ride your bikes through the backwoods, swerving to avoid the scientists who, of course, want E.T. for their own, greedy, scientific purposes. And just like that iconic scene in the movie, your bikes take to the skies over the city, on the wings of John William's epic score by the shining moon, and a few warp drives later, you wind up on E.T.'s planet, on the last breath. Time for an alien with a switchblade finger to save the day!

The effects are undoubtedly better than Peter Pan's flight, there's more care and attention to details (Thanks, Steven!), far more than anything I can say about Fantasyland's flagship ride. I'm sorry, but it does! Not to mention I have to give credit to E.T. for providing an original story, rather than just rehashing the movie. Is it a good story?...well, actually, I have one major nitpick. Why is it that only E.T. is the only creature on the ENTIRE PLANET to have the ability to heal an ENTIRE PLANET? For me, that is a weird and bizarre flaw. I have serious trouble overlooking this when the rest of the ride is so great. Like that amazing queue of the forest, complete with E.T.'s communicator device and the frequent appearances of E.T.'s teacher, Botanicus.

The only other major flaw I find is the attraction's finale. It mixes with a typical whimsical Spielberg ending with a few too many spoonfuls of Nyquil. It's sort of a weird acid trip that's adorable and cute, but at the same time, you're forced to ask, "What the flying heck?..." But of course, the final touch (And the reason for your passport) is so darn endearing...if your name is in the system of course. Otherwise, E.T. will just address you as "Friend".

Overall, always an enjoyable experience. Even despite the odd plot hole, I am glad to ride it every time. But in the end, I suppose that's the hallmark of truly great ride: not one without any errors in its story, but allowing me to enjoy it despite them. Just whatever you do...don't mention "Atari"...