Six Flags Magic Mountain has confirmed that it will install a new roller coaster named Full Throttle in 2013, with the ride set to be the tallest, fastest looping coaster in the world.

As had been widely rumored, Full Throttle will feature a record-breaking 160-foot loop. It will also boast a number of other unique elements, including a "top hat" element that spans the other side of the loop, and a total of three launch sections. It will be manufactured by Premier Rides, and will make use of a magnetic propulsion system.

The first of Full Throttle's launch sections will see riders hit a speed of 70 miles per hour, before racing through the vertical loop. After a banked curve to the right and a dive loop, they will then plunge into an underground tunnel. Inside this, they will then be launched backwards, before being dropped into a third, forwards-facing launch section that will send them over the top hat element. Finally, the train will plummet back towards the ground and into a final bend before returning to the station.

Full Throttle will be the centerpiece of a new five-acre section housed close to Six Flags Magic Mountain's entrance. This will feature what the park describes as a "high-energy action" theme, and will boast "fast-paced imagery, sound and lights". 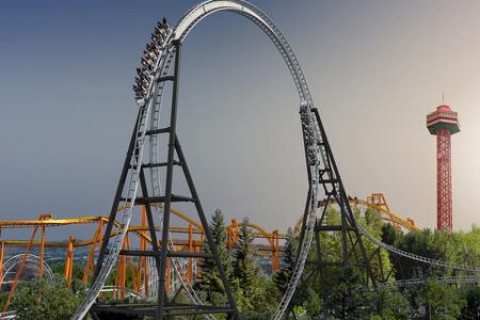 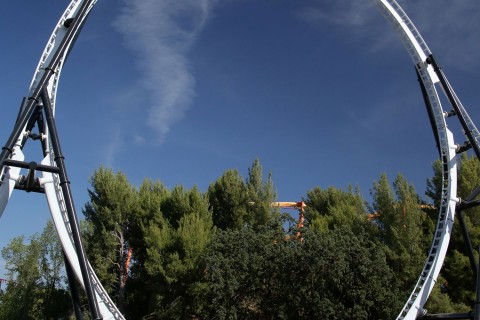 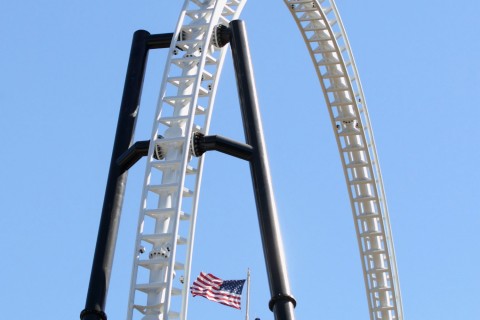 See all photos of Full Throttle

Full Throttle lives up to its name and delivers a true "full throttle" experience to the riders. Six Flags is not known for its theming, but the theme of this ride sucks you in from the start. As you enter the Full Throttle Plaza, you can feel the energy. Six Flags pulled out all stops and has a high-energy show exploding around you as you wait in line. If that doesn't get your blood pumping, your heart pounding, the full throttle-sized TV in the line queue playing a montage of people living life "full throttle" will. By the time you hit the front of the line, you are primed for the ride of a lifetime. All rows give a great ride, but the best rows are first row if you want an awesome view of the drop over the record-setting loop and the wind in your face or the last row if you want the best ejector airtime and a more intense launch. Once the riders are secure, waiting on the track for their big ride, the operators keep it fun by trying to launch the train when you least expect it. As you fly off down the launch track at 70 mph, the train soars into the world's tallest vertical loop where you hang, and hang, and hang all while taking in a glorious view of the entire park. Just when you think (wish!), the train is going to roll back, you ease down the loop. You twist around past the on-ride photo into the tunnel. Then, BAM!, backwards you race into the dive loop you just completed. The train falls out of the loop, back into the tunnel, where it receives a burst of incredibly smooth speed -- another launch! And back you race, up and over the vertical loop, which has you rising slowly up out of seat with negative Gs until the brakes kick in, ejecting you with the best airtime you'll ever get as you glide down the loop and back to the station. This is purely the smoothest ride you'll ever experience -- there is literally not a single bump, a single rattle, nothing but wheels gliding on the smooth, white track. Get there early so you can ride often, but this ride is worth the wait if you don't. It's good, clean, smooth fun.

This is one coaster that shows that one should not judge a book by its cover. As you enter Six Flags Magic Mountain, you are already surrounded by world class coasters. But none of these coasters can deliver an experience like Full Throttle. Once you enter Full Throttle Plaza, you say, "so what. It's just a big loop." This is where Full Throttle deceives you. Just entering the queue line, you start to become energetic. Videos playing showing people living life to the fullest along with heart pounding music just makes the experience more thrilling. Once you make it to the station, you are then disappointed. This sad design of a station does not give the ride justice. Its then time to ride. You sit back with your legs locked in by this knee/leg pad. Then its time to launch. You are blasted out of the station at 70 mph into the world's tallest loop. It is here where you experience something that other coasters never deliver. Hangtime. As you reach the top of the loop,your train slows down to a crawl and you cry hoping that the train will make it all the way around the circle. You hang for a time that feela like forever. Eventually you dive back down and start your journey to the other side of the mountain. Flying over Superman plaza, you take a dive loop into a tunnel. You stop momentarily when you are blasted backwards out of the tunnel back into the dive loop. you are then pushed forward out of the tunnel over the top of the loop you started the ride with. You slowly creep over the top when you come flying out of your seat from Full Throttle's ejector airtime inducing drop. It is then all over and you have taken a ride on an intense coaster. Even though this ride looks small and mediocre, Full Throttle proves that you can never judge a book by its cover.