Touted as the world's tallest gyro drop (alongside its sister at Kings Dominion), this massive tower ride seats guests in a giant ring that slowly revolves on its way up the tower before rocketing back to earth from over 300 feet high. 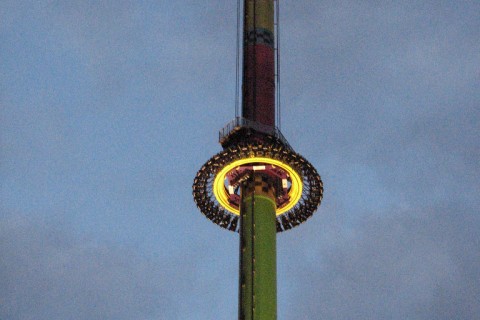 Submitted by Anonymous (not verified) on Thursday, November 14, 2013.

Drop Tower is definitely not a ride for the faint of heart. Your heart begins to pound and you start to question your sanity before even getting on the ride; Just looking up at the towering structure is intimidating. But for the most die-hard thrill seekers, this is a ride of a lifetime. It is a must-ride at the park due to its high thrill and unique experience.

Once you sit in the slightly tilted seat with only a seemingly pathetic excuse for a harness securing you, your hands begin to sweat as you clench the handle bars as tightly as you can as you ascend up the tower. It takes a decent amount of time to reach the top, allowing you both to think about your crazy decision to get on the ride and to enjoy the view. The ride vehicle rotates in a circle as it goes up the tower, allowing for 360 degree views of the park and surrounding area. The view truly is breathtaking. Then the carriage stops spinning and climbs to its highest altitude. Then it's the worst-and the best-part of the ride. You are sitting there, feet dangling, seeing yourself high above the park's landscape. Your heart is beating fast, since you know you are about to drop but don't know exactly when. Just when you thought you couldn't wait anymore, you plummet into a stomach churning freefall. Then after a fast, intense drop you slowly and smoothly glide to a halt. Drop Tower is one of my favorite rides at Kings Island and is a thrill seeker's dream come true.

One of the best "Flat rides" you will find anywhere

Submitted by Anonymous (not verified) on Saturday, October 12, 2013.

Drop Tower is in my opinion the best non-roller coaster ride at Kings Island. I personally think it is More exciting than Delirium, and MUCH better Windseeker.

- It's EXTREME height! Although it may be considered scary by lots of riders, it's still one heck of an adrenaline rush.

- The suspense waiting to drop

- It's awesome negative g's during the drop. It gives your stomach that 'whoa' feeling (the best part of the ride).

- The view from the very top!

HOW LONG IT'S WORTH WAITING FOR:

Um, I'd say if it's any longer than about 40 minutes, then I would ride something else until the line dies down(if it will die down, if it's crowded and every line is long and you'll only be there for one day, I'd ride it no matter how long the wait is). Although it's exciting it's capacity isn't too good so the line can move pretty slow.

TIP: If your arriving at the park first thing when it opens, I'd suggest hitting up Drop Tower first and all the other rides in Action Zone as that part of the parks seems to be the most crowded during the afternoon and the capacities for those rides are very low. After hitting up those rides, I would work clockwise through the park starting with Oktoberfest, through Coney Mall, and finally going to Rivertown.