When a playful dinosaur knocks your tour raft off course, it's a desperate race to escape! As raptors surround the boat, guests' only hope is to seek shelter in the Enviornmental System Building. But an even bigger dino has nested there, and the only escape is an 80 foot drop. 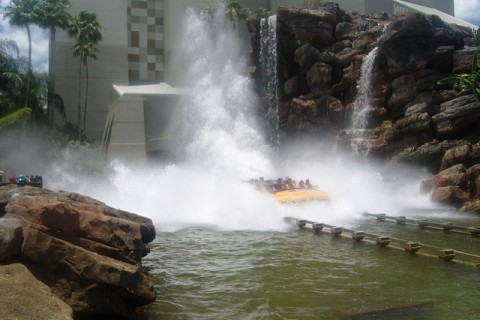 With the worldwide box office smash success of the first "Jurassic Park" film, it was almost just natural that Universal would try and cash in further by making an amusement park thrill ride based on it......and they did.

Thankfully, it was a thought out process and not something they hurriedly slapped together that made for a less than enjoyable experience. The result? A better than average log flume ride with a great drop that does NOT leave you soaking wet. Believe me, that's important.

The ride itself works because it makes you feel like you're at Jurassic Park, and reliving scenes from the movie with its varied (and well-done) animatronic dinos (including velociraptors, dilophosaurs, brachiosaurus, and of course T-Rex), the movie's theme music playing, missing out on being crushed by a falling park SUV, and the great final drop where you narrowly escape the roaring and snapping jaws of a T-Rex.

It really is a good ride. Little kids may be frightened slightly once it enters the building and heads upwards towards the final drop, but they may also love seeing the dinos as well. With the announced "Jurassic World" film coming out in 2015, I can see a resurgence in popularity with this ride.

It is a good ride, check it out.

While I have been a Jurassic Park fan for most of my life (born in '88), I was very excited to experience the Jurassic Park River Adventure ride for the first time.

However, that experience was instead marked with a few bad memories, including a few features of the ride that were not working during my visit.

The ride does a nice job of showing you a few of the dinos featured in the movie, but I felt like the ride left me wanting something more. However, maybe more could be on the horizon with "Jurassic World" to come out in 2015....