Sorcerers of the Magic Kingdom challenges players to become apprentice sorcerers for Merlin the magician, before helping him to overcome an army of Disney villains that are threatening the park.

Players use special playing cards to cast spells, as well as searching for magic symbols that lead them to the villains' hiding places. 70 different spell cards are available, with guests receiving five free cards when they sign up to play.

Photos of Sorcerers of the Magic Kingdom 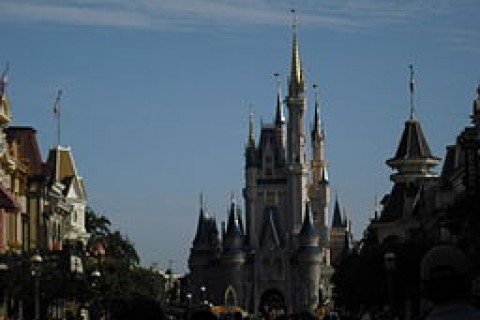 See all photos of Sorcerers of the Magic Kingdom

Reviews of Sorcerers of the Magic Kingdom

Submitted by Anonymous (not verified) on Tuesday, October 8, 2013.

Egad! Hades, that fire-coiffured megalomaniac from Disney's "Hercules" is at it again! Only this time, the devil has his sights aimed at Cinderella Castle. The only thing in his way is a crystal, which guards the kingdom from evil, kept in Merlin's study. Naturally, Pain and Panic, his bumbling lackeys, botch up the errand and the crystal gets smashed! The crystal's magic is undone and the shards scatter across the park (yet mysteriously skip Tomorrowland.)Hades, infuriated, decides to deal with the local baddies in each area to obtain the crystal shards so he can rule the Magic Kingdom! But not only does Merlin stand in his way...so do you, sorcerer!

When you enter Main Street's fire station and the kiosk behind Liberty Square's Christmas Shoppe, the cast member will sign you up...for free...and you get a pack of five spell cards, a key card, and a map. You must travel from window...er, "portal" to portal in a designated land, and defeat each villain who is Hades-bound to obtain the crystal. Among the villains you have to battle are Cruella DeVil (On Main Street U.S.A.), Yzma, Scar, Jafar (In Adventureland), Ursula, Maleficent (Fantasyland), Dr. Facilier, and Governor Ratcliffe (Frontierlan/Liberty Square). Heroes like the Genie, Pocahontas, Merriweather, and Rafiki aid you in your quest, while you try to stop Pain and Panic, Horace and Jasper, Kronk, and Flotsam and Jetsom. You activate each portal with your key card, hold up one of your spell cards to fight the villains, and when your task is completed, you move on to the next portal...hence the map. Once you defeat all 8 villains, you and Merlin face against Chernabog and Hades in a final showdown! EPIC!!

Here are the great parts of Sorcerers of the Magic Kingdom: Immersive storytelling. Great animation. Wonderful voice acting. The ability to collect and trade the spell cards is an untapped treasure beyond any measure. It's a new attraction that has not torn down any structures or shoehorned in any unnecessary elements. You can drop out at any time and continue the next day if you want to. It's free of charge. During Mickey's Not so Scary Halloween Party and Mickey' Very Merry Christmas Party, they release special holiday event cards you can't get unless you attend the event. The friends you can make waiting in line for each portal is a lot of fun.

So what's bad about it? Well, nitpickey things, mostly. After a short while, the game becomes very repetitive. Despite Disney adding a medium and hard level does little except cause you to play your cards more than "one-shot-and-you-defeated-them". Sometimes additional minions like Glut the shark, Iago, and Banzai attack, but almost never anymore.

But the repetitiveness is what could very well kill this attraction. When this experience opened in February of 2012, it was a smash hit. We can collect all the cards! We can fight all the villains! We can win the game! We can...do it...all over...again? As I mentioned, Tomorrowland is mysteriously omitted, as are Storybook Circus and the rest of New Fantasyland. Disney even had a chance to market this game by selling a home version, but it's mostly overcomplicated, and even if it were viewed as a Yu-Gi-Oh!knockoff, it'd fare well among Disney fans. But it seems only the t-shirts and the pouches are the big sellers.

The cards are the best part. Like the pins, they range from insanely abundant to "only available through purchase", like the Halloween and Christmas ones, or the ones sold in the home game packs at Sir Mickey's. There are over 70, and each one is a Disney character with a special attack, From Buzz Lightyear's Astro Blaster to Winnie the Pooh's Hunny Bees. Some don't even make sense as an offensive attack, Cinderella's ribbons, but I digress. It's fun to imagine, and the trading online has taken off inexplicably well. Why Disney hasn't set up card tournaments at the Contemporary is relatively mind-boggling.

But for me, I want to see this game grow and expand. I assume Disney wants to keep it the same for once-in-a-lifetime visitors, as is a large majority of their demographic, but the average Disneyophile can't help but speculate: When will there be a whole new batch of cards? Will there ever be other villains to battle? Heck, will we see Indiana Jones, Luke Skywalker, Darkwing Duck, Agent P, Iron Man, or Wolverine cards?

This game has so much potential to expand. Whether the imagineers are biding their time, and seeing how it pans out, or just stopped being interested, we'll never know. But this can't be it. I want to have the chance to battle Gaston, Ratigan, Zurg, Gantu, Medusa, McLeach, Shere Khan, Clayton, Stromboli, Queen of Hearts, Br'er Fox, Captain Hook, Madam Mim, Oogie Boogie, Syndrome, Randall, Frollo, Lady Tremaine, Mother Gothel, or even King Candy. And hero spell cards? Why not (in addition to the ones above), GizmoDuck, Kim Possible, Goliath, Han Solo, Pecos Bill, Sttich, the Beast, Tigger, Zorro, Davy Crockett, Jack Sparrow, Peter Pan, Tarzan, Merida, or Sulley? (If they chose to include Mr. Toad, Eeyore, Doris, Pinocchio, Heffalumps and Woozles, and Lightning McQueen, anything is possible!)

Despite my gripes, it's a great, imaginative game. I only want to see it reach its full potential, and maybe we can complete the game by defeating so many villains, and for once be glad our feet hurt from so much walking.