A 4-D movie starring Mickey Mouse and Donald Duck, which sees Donald scuppering a performance of Mickey's orchestra. A number of musical numbers from classic Disney movies are featured, synchronised with "4-D" effects such as shaking seats and water sprays. 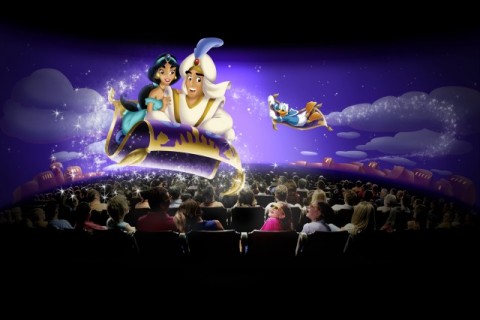 See all photos of Mickey's PhilharMagic

This is one of the shows that I can't ever see going from Magic Kingdom now. A fantastic opera of famous Disney 2-D movies splashed with CGI and Donald Duck is the star.

It all centres around Donald putting on Mickeys Sorcerers Hat and all hell breaking loose, and the hat going walkies so Donald stumbles through classic Disney movies like Aladdin and Little Mermaid to grab it back. It's a wonderfully animated 4-D show where you can sample the classic Disney movies in a different format.

It's funny, clever and really does capture Disney's spirit. Love how they incorporated the Disney movie scenes and gave it a new lease of life. Really enjoyed it and as shows go, this is up there with the best of them in Orlando!

Only gripe, is I wanted it to last longer! But that's just me being greedy!

There are a lot of things that Walt Disney imagineering does extremely well, most notably in coming up with a variety of terrific attractions throughout the theme parks comprising the Walt Disney World resort in Florida. Sometimes those attractions come in the form of great rides, and other times in the form of great 3D shows. Each of the theme parks in Florida has their own special 3D show as one of their park attractions, and each one of them is terrific in its own right. At the Magic Kingdom park, within Fantasyland (the land directly behind Cinderella Castle), lies Mickey's Philharmagic, a highly entertaining 3D show that includes not only Mickey Mouse and Donald Duck, but a slew of other characters from some of the biggest Disney animated films. It is a "not to be missed" attraction, in my opinion and one I'm sure you (or you AND your kids) would really enjoy.

After a brief wait in the lobby (if another show is already in progress), the doors open towards you and you and the other park guests walk inside and take a seat in the theater. Before the show actually begins, you're treated to some of Goofy's clumsy antics by way of clever sound effects in speakers hidden around and behind you. Finally, the show begins (put on your 3D glasses at this point), and we see Mickey Mouse magically conducting an orchestra of instruments (with no players). He's using a sorcerer conductor's wand, and after he has to lay it down, here comes old Donald Duck to pick it up and try his own hand at conducting. BOOM! Before you know it, Donald is caught up in some kind of vortex where he's chasing after the wand and ends up in a variety of places from Disney animated films such as "Aladdin", "Beauty & The Beast", "The Little Mermaid", "The Lion King", "Fantasia", and others. The characters from those films lend a hand in helping Donald get the wand back again safely to Mickey.

I'll admit it, I'm a sucker for the 3D shows in Disney World. This one is probably my favorite of all of them. It has the best characters in it, the 3D technology is more convincing and provides a more exciting show than the others, and it's full of the catchiest songs and best physical effects of any other 3D show in any of the parks. The physical effects include smells, bubbles, and a small splash or two of water (don't worry, you won't get soaked).

This show lasts about 12 minutes in total length, which could be just long enough for some, and probably not long enough for others. Given the hot Florida sun that parkgoers get to experience in Disney World, an added benefit of taking in Mickey's Philharmagic is that you get to take a brief time-out in an air-conditioned theater as you enjoy a good show. Some inconsiderate park guests tend to walk into the theater and plop themselves down in the middle of an aisle and won't move, imagining those are the best seats for the show. In reality, no matter where you sit, you can enjoy the full effect of the 3D and the entire show as a whole.

Among other sights and sounds during the show, you get to go "Under the Sea" with the Little Mermaid, soar on a magic carpet ride with Aladdin and Jasmine, you get to "Be Our Guest" with Lumiere (the candlestick from "Beauty & The Beast"), and sing along with "The Lion King" and his friends.

It really is a great show, and a great break from the sun. The ONLY slightly negative I could come up with is that it does have moments (very brief) where you're sitting in darkness, and between those moments and moments when things get quite loud in the show, that could startle the youngest of children. So parents, be aware of that.

Like any attraction in the Magic Kingdom (the most popular of the Disney World parks), at times there may be quite a wait - depending on what time of year and week you go. Because of that, Mickey's Philharmagic is a Fastpass attraction. That means you can insert your park ticket into the kiosk close to the entrance and be given a ticket for a return time in which your wait to take in the attraction will be minimized.

Personally for me, this is one of those attractions that I hate to miss and I make it a point to see it at least once or twice a trip. If you haven't had the opportunity to see it, or may have passed it up thinking it isn't anything much, do yourself the favor of going in and checking it out and have a good time.

Disney's Classic Movies and Characters In a 4-D Experience

From my recent experience, you should only have to wait 20-30 minutes before getting a chance to experience Mickey's PhilharMagic that includes an array of sense tickling effects.

The best effects come from the large "surround" style theater and projection system that allows you to see in 3-D all around. The addition of smells and a few squirts of water during the show presents a video viewing experience that is unmatched by any other show.

While there are some other 4-D shows that do a great job at Disney, Mickey's PhilharMagic does the best at surrounding you with the video's effects, including the launching of Donald Duck right into the theater with the viewers at the end.

Let all your senses experience this amazing show!

Put on your 4-d "opera" Glasses and be ready to have all your senses stimulated along with all the best of Disney Characters!
You experience the smells, the feel, the sights, the sounds of what is happening on screen after that mischevious Donald Duck gets into a whole lot of trouble just by putting on a hat that rightfully only belongs on the Big Cheese, "Mickey" himself.
You are transported through some of the best of Disney Animated features with all your senses right there in your seat in front of the extremely large 150' wide screen!
Don't forget to look behind you at the end of the show, is all I will say.
This is a 12 minute show that should not be missed on any trip through fantasy land!