This graceful white paddle boat circumvents the Rivers of America around Tom Sawyer Island, passing the sights of Frontierland and Liberty Square as riders explore the decks of the historic steamboat. 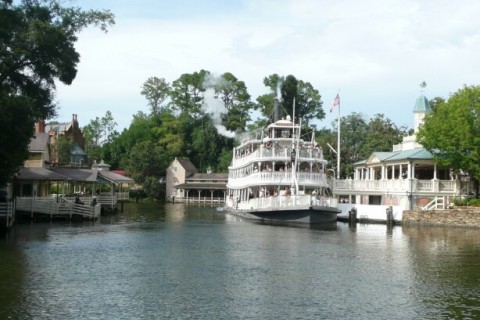 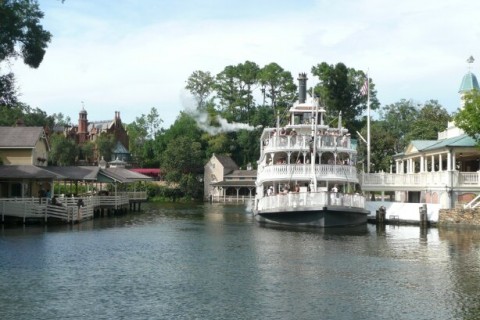 Liberty Square (or Belle) Riverboat - Take It or Leave It

Submitted by Anonymous on Sunday, September 8, 2013.

A personal goal of mine when going on each trip to Walt Disney World, particularly to the Magic Kingdom, is to try at least ONE attraction that I've never tried before. Usually I'd have always had the opportunity to try them but they never struck me as particularly interesting, so I'd typically pass it by. One such attraction that's pretty much always been there and I'd always walk on past, is a ride on the Liberty Belle Riverboat.

Located on the "Rivers of America", in-between the lands of Liberty Square and Frontierland, the Liberty Belle Riverboat is a slow-moving, 17-minute long ride on an authentic steam-powered sternwheeler. You go aboard at Liberty Boat Landing, and once aboard can stick on the main level or climb the stairs and walk out on deck from the upper level and enjoy the surroundings from either side of the boat. Most people choose to stand around the railings, but there are a few seating areas on either level if you'd rather just sit and take it all in.

For me, personally, the results of my first trip aboard were a confirmation of my previous notion that it wasn't worth my time, and a confirmation that it would most likely be my last trip on it as well. It's not so much a matter of having motion sickness or anything like that, in fact it's not that at all......but what it is is that it's really a nothing kind of attraction. It's just boring. It's just a big, slow-moving boat that goes around in a circle in 17 minutes and that's the extent of it. There is basically NO entertainment value to this attraction at all.

The only real positive thing I can state is that it gives you some pretty decent views of other attractions, view that can allow you to get some good camera shots.....mainly of either Splash Mountain, Big Thunder Mountain Railroad, or the nearby Haunted Mansion.

In the end, if you've never gone for a ride on the Liberty Belle Riverboat, I suppose I can recommend it enough to say "try it once". But after that initial try, I think you may agree it's not really worth the time.