Guests travel the rivers of the world as they embark on a Jungle Cruise past animatronic animals, lost explorers, and through a collapsing ancient temple. The hilariously live-narrated tour is a Disney classic. Jungle Cruise underwent a major refit in Summer 2021. During May several scenes from the Jungle Cruise were removed while Disney was preparing for the reimagining of this attraction. The ride now has a new story and creative concept which allows guests to follow a Jungle Cruise skipper and their passengers as a journey goes awry. Guests float by a skipper who’s been chased up the pole by the rhino along with the other explorers as well as an all-new scene where a sunken boat splits apart and chimps board the wreckage, with monkey business ensuing. There is another sunken Jungle Cruise boat in the Hippo pool, and a "Trader Sam's" gift shop set near the end of the ride. 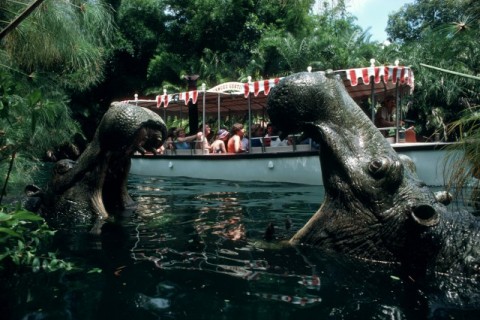 See all photos of Jungle Cruise

A very tame ride in the heart of Magic Kingdom is great for nostalgic reasons, but for those not interested in the history of the park, they'd probably find it fairly boring and pointless.

This was the first ride I ever went on as a kid in Orlando in 1996 and I was chosen to be the skipper and still have the photos to remind me. The lady driving gave me the wheel and I fully believed I was driving the boat while she was narrating. Nowadays, as a young adult, I don't go on this ride with the same excitement and anticipation as I did in my younger days. It is outdated, quite boring and the jokes are lazy. The people 'driving' the boat seem a little embarrassed to tell the jokes sometimes, and the conviction of the punchlines are so scripted its cheesy. The animatronics are just poor now and need updating. The jokes are worn out and no one finds them funny anymore. Especially the drivers.

If it's nostalgia you want, then Jungle Cruise is great fun, as it reminds you of how theme park rides used to be back in the 60's. Yes it is an original, and I understand it should stay in the park due to its classic status, but surely a refurbishment wouldn't go amiss.

Classic? Maybe. Worth your time? Not a Chance.

Walt Disney himself had a lot of input and say on a number of the original attractions that made up the Magic Kingdom park when it was built. One of those original attractions is Jungle Cruise, and because it's an original and was one of Walt's personal favorites, some feel it should simply always be in service and never touched as in replaced or updated. I can understand that view, as there is so much progress and new things coming all throughout Disney World that it may seem like the old favorites will be lost forever in the shuffle.

Personally, I'm not one of those "some" who feel this is a great attraction and shouldn't be touched. I've ridden it when I was young, and I've ridden it when I was older and I've never considered it more than a "mehh" attraction at best. I'm of the opinion that the day for this attraction is long since over and it should be retired into that old book of remembrance of Disney attractions of days past. Time to look to the present and future and use the space here for something new that's actually interesting and enjoyable.

If unfamiliar with this attraction, it is a boat ride located in the Adventureland area of the Magic Kingdom. Its theme or story is that your boat skipper is taking your all on a leisurely boat ride along four of the world's most famous rivers: South America's Amazon, Africa's Congo, Egypt's Nile, and Cambodia's Mekong. Along the way you come into close contact with a number of exotic animals: pythons, hippos, elephants, crocodiles, gorillas, lions, and so forth. You also come in contact with some of the savage headhunters of the area. This slow-moving boat ride also takes you behind waterfalls and through ancient temple ruins before bringing you right back where you started.

*** NOTE: When you come upon the half of a plane during your cruise....if you're wondering where the other half is, just check out the Casablanca scene in the Great Movie Ride over at the Hollywood Studios park.

In and of itself, the ride is a harmless, non-exciting tranquil little boat excursion that the small, small children may get a lot of enjoyment out of, but most adults would probably find incredibly boring. (Although, it does get a little dark and possibly frightening for those little ones when the boat briefly goes through the temple scene.) Some of my issues with the ride is that it appears none of the animatronics have been updated at all and there are much better animatronics in other attractions in the park. Why not try and improve them here? Also, your skipper - try as they all do - cracks some of the most unfunny puns all throughout, which tended to get a little annoying (especially so since if you ride several times with different skippers, they tend to just use the same jokes again and again).

Don't get me wrong, however, I'd say it is worth at least ONE ride to see what it's like and to see that you're not missing anything here. It still is a popular attraction, one that even has Fastpass machines for it. But again, I don't care for this attraction, and the fact that it is still somewhat popular tends to work to my advantage because it keeps those people off the lines of the other rides I really enjoy.

A Disney Classic...full of cheesy lines that make it enjoyable

While it is far from the most thrilling ride in the park, the Jungle Cruise is a classic Walt Disney original!

When Walt Disney first looked at making a jungle cruise, he recognized that animals are not always the best at making themselves known to ever boat that would come through. To combat this, he built his own and used a few animatronics along the way to create some movement from the animals as well.

Today, the jungle cruise guides do a great job of making the ride a humorous experience while still enjoying a true Disney original.