This interactive dark ride allows riders to join Buzz Lightyear and the Little Green Men as they travel into space and take back the batteries stolen by the evil Emporer Zurg. Laser guns affixed to the ride carriage allow riders to compete as they score points. 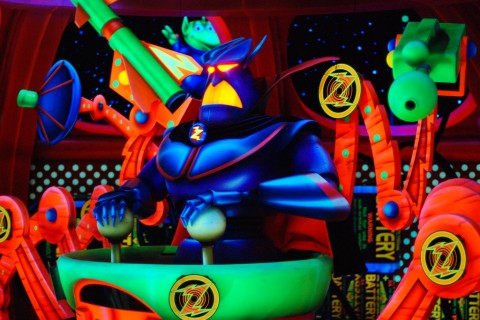 Fly Around the Galaxy with Buzz Lightyear!

Think you have what it takes to join Star Command and help defeat the plans of Evil Emperor Zurg? Then by all means come and join Buzz Lightyear and become a Space Ranger by going for a ride on Buzz Lightyear's Space Ranger Spin, found in the Tomorrowland area of Walt Disney World's Magic Kingdom theme park.

Don't be scared of a long line, as this attraction is a quick-moving "constant loader", meaning that the cars are constantly coming and going with passengers exiting and loading up. As you zig-zag your way through the queue upon entering "Star Command Headquarters", you see Buzz himself (a large animatronic Buzz) telling you about your mission and how you have to help stop Zurg from stealing all your power cells. Alongside Buzz you'll see a large viewmaster, which moves from time to time as Buzz explains what you have to do.

Then....it's ride time. Climb aboard your Space Ranger vehicle and you'll notice 2 guns and a control knob on the console. As you make your way from one room to the next, you'll encounter many Z-shaped targets. Hit them and you'll really rack up the points (some targets can really make your point total jump), but be sure and use your joystick and spin your car because the targets can be found on either side of you. At one point, you're in a room with Zurg's secret weapon projected on the walls around you. Don't forget to fire at it in that room too because you can still get points.

It's really a very simple ride, but it's a ton of fun. I took my wife on it on our honeymoon and she couldn't get enough of it (sure, that was only when she was wiping the floor with me). But, once I found a certain spot within the ride that really helps rack up the points, I quieted her down. She was yelling at me too, because it seemed that each time I spun the car around, it was right when she was aiming or shooting at something and it made her miss. So be sure if you get in the car, you control the spinning (not that it makes you more likely to come out on top of your partner, but so that they don't mess YOU up when you're firing).

This ride is really a blast, whether or not you even know who Buzz Lightyear is. Be sure and try out Buzz Lightyear's Space Ranger Spin the next time you visit the Magic Kingdom, you'll find that it's not just another silly kiddie ride, but is a fun and addictive experience.

Such a great ride, you can have lots of fun trying to beat your partner's score. The ride is getting a little old around the edges - some of the guns in the chariots don't work very well. However, the fun factor is there, especially if you enjoy the Toy Story franchise and love shooter games - great for ages 4+, some children might not enjoy the dark areas.
I really enjoy this ride!!!