In possibly Walt Disney World's most unique restaurant, guests sit in 1950's convertibles under a starry night sky in a giant drive-in theater! Diners seated in the car watch snippets from Hollywood's early, now-cheesy sci-fi masterpieces! There is a wide menu choice for both lunch and dinner including burgers, turkey sandwich, pasta dishes and chicken salad, a kids menu, a special menu for guests with allergies and a good choice of soft drinks, wines, beers and cocktails. Reservations are encouraged in normal times and are necessary when there are pandemic restrictions.. 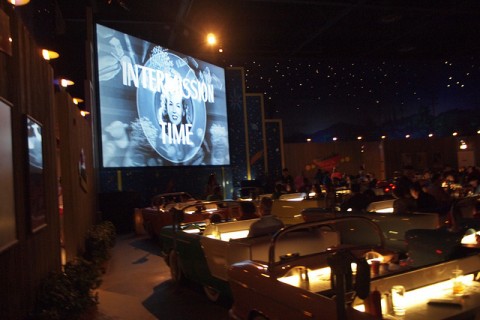 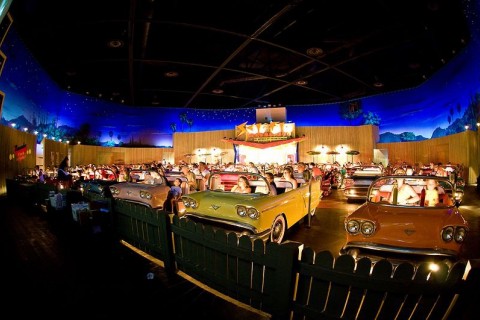 A Staple of Our Disney Trip

Submitted by Anonymous (not verified) on Thursday, October 22, 2015.

I think we first visited the Sci-Fi restaurant back in 1999, and I've been hooked ever since. I love the ambiance there --- the feeling that you really are outside, under the stars at a drive-in theater. The "cars" are ingenious. The food is great! I haven't had an issue with anything I've ever ordered there, and the milkshakes have to be among the world's finest. The staff is always very nice as well. The ONLY thing that I wish was done differently is now that Disney owns Star Wars, I wish they'd work some Star Wars clips into the rotation on the screen. That would be perfect! But this place has become a must-do every time we go to Disney!

Submitted by Anonymous on Wednesday, September 25, 2013.

For the longest time, I'd passed by the Sci-Fi Dine-In theater in Disney's Hollywood Studios on different trips always mildly curious as to what kind of eating experience it would be. I knew that its theme was one of dining at a drive-in movie, and that you basically sat in tables that were designed to appear as 50's cars with their tops down and that you sat there and watched movies (or movie clips) while you ate.

On one of my more recent trips, I took the plunge and made my group a reservation to eat there for lunch.

The overall feeling: theme-wise the place is incredible and extremely detailed, so much so that you can almost forget you're in a building and not at an actual drive-in theater. It's THAT realistic. But in terms of the food, it was VERY disappointing.

For one thing, as great as its drive-in theme is, you will quickly notice the screen is showing nothing but the same few clips or ads for old 50's movies.....over and over again. So you'll see the same things numerous times during your meal. BORING!

One reputation the Sci-Fi Dine-In Theater has is that they have some great milkshakes. On THAT point, I can't deny it, they are just delicious. I had gotten this orange-flavored "lava" kind of shake that was phenomenal. Others had an oreo shake or plain chocolate shake....all of them were delicious.

But it was with the main meals themselves where things fell flat. I had the Angus Chuck Double Bacon Cheeseburger with Fries, and it simply wasn't good. It wasn't particularly thick, in fact more on the thin side, and the fries were somewhat soggy with not much flavor at all. My wife had gotten the Smoked Turkey Sandwich and couldn't even finish it, she said it simply didn't taste good and had very little flavor to it. She also agreed on my assessment of the fries.

So then, so far the best aspects of the place are its undeniably great theming and its shakes. The main meals leave a lot to be desired, and then as far as the desserts go, I had a hot fudge sundae which was adequate but not spectacular, and my wife had the peanut butter and chocolate cake, which she praised it as "ok".

In terms of service, we did feel a bit let-down there as well. When it was our party's turn to be seated, they took us in, sat us down, and within a few minutes our waitress came and took our drink order. Then she came with it and took our meal order. Then she came back again and took our dessert order. Finally she came back the last time and we paid our bill and left. There were very few - if any - regular trips to our table to see if we needed anything or how we were doing. We were basically herded in, given perfunctory waitressing service, and then we left.

I can't really recommend anyone eat here UNLESS.....you've never done it before and would like your own experience there. Who knows, you might have a better time than we did. But for me, the Sci-Fi Dine-In Theater is a big let-down.

Submitted by Anonymous (not verified) on Friday, September 13, 2013.

I love every moment of this place - from the cheesy sci-fi movies to the cars you're served in - just like at the drive in. The food is a bit above mediocre, but the experience makes it all worthwhile. Everything is available from burgers and fries to salads that fill you up for the day. That said, the desserts were excellent - and amazing considering two of the three in our party needed sugar free for health reasons. This is such a fun place. Make your reservations. You'll be glad you did.