This extreme stunt show is unlike any other in the nation, as skilled drivers manuever slick, espionage-style cars around special effects, ramps, and flips in an incredible display of stunt work. 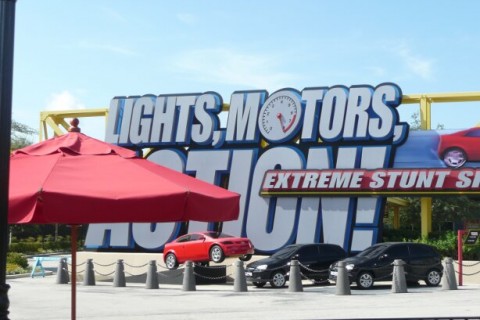 Somewhat Fun and Keeps the Other Ride Lines DOWN

If you've ever watched tv and saw a car chase on a show, then you already know the driving is done by stunt driving professionals. What you already know is what you see, and what you see there is exactly what you're seeing if you stop and check out the "Lights, Motors, Action! Extreme Stunt Show" at Disney's Hollywood Studios.

Basically, after telling you about their stripped down, super-cooled, lightweight car, the show takes off with examples of wild chases, some jumps, some fancy backwards driving, and a man in a fire-retardant suit going sliding across the ground and catching fire. That's pretty much the gist of the entire show, of which you are seated in a huge stand of hard bench-seats for the MANY other park guests who will be seated around you.

There's a small "can we have a volunteer from the audience" bit, and a video playback of the car chases that show you how such things are edited on tv and in movies to make them look more dangerous and exciting than they actually are in the stunt show itself.

All in all, it's not terrible...somewhat fun, really, but not quite the kind of show I'd have to see many times. Little kids would be enthralled, I'm sure, especially when the "Cars" movie characters of Lightning McQueen and Mater show up briefly.

At the very least, because the show theater holds so many people, those are the people you don't have to wait behind in line for other attractions. But then again, if you're joining those people in checking out this stunt show, that's a pretty moot point.

See it once, you may like it and may not need to see it again.

Why not go ahead and just call it Cars and feature the characters from the films a bit more?

The stunt show is a great mix of effects and impressive stunts that make the show a true "sight to see". You even get a chance to see how some of the scenes in movies are created, such as a backward facing car (you'll see it in the show).

Pixar's Lightning McQueen and Tow Mater also make appearances at the show, and I have often wondered why Disney does not go ahead and do the true "Disney" thing by making it a show that features several characters from the movies doing these stunts.

No matter Cars themed or not, kids will still enjoy the stunts that are spread throughout the show. My sister took my one-year old nephew earlier this summer and he was completely infatuated with the show.