The submarine that is partially submerged in the lagoon in front of Space Mountain: Mission 2 appears at first sight to be a simple piece of scenery. Look closer, though, and you’ll discover that it’s actually possible to explore its innards, as part of Les Mystères du Nautilus attraction.

Another of Disneyland Paris’ surprisingly long list of walkthrough attractions, the “Mysteries of the Nautilus” takes guests on a tour through the rooms of Captain Nemo’s submarine as seen in “20,000 Leagues Under the Sea”. While based on a similar attraction that was housed at Disneyland some decades ago, it is now a unique offering.

The entrance to the attraction is easy to miss, as it is located in a lighthouse-style building to the right of lagoon as you walk towards Space Mountain. Once inside, guests descend via stairs or a lift to the submarine’s interior below.

Six rooms feature on the tour, including the ballasts compartment, Captain Nemo’s cabin, the charts room (featuring a number of detailed maps, and many tributes to the movie), the diving chamber, the main salon and the engine room.

The clear highlight is the main salon, which is packed with trinkets, books and other theming elements. It is also home to the main special effect of Les Mystères du Nautilus, with a giant squid attacking the submarine before being repelled by an electric shock device. 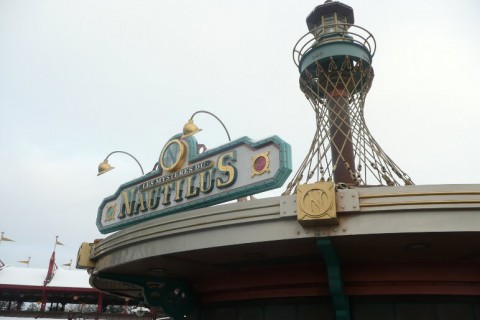 Sorry, there are currently no reviews for Les Mystères du Nautilus .