Opened in 1994 as part of a major expansion of the Fantasyland area, Les Pays des Contes de Fées is closely based on Disneyland’s Storybook Canals Boats ride. Aimed at younger visitors, it offers a slow-paced journey past a variety of miniature scenes from classic Disney animated movies. These include “The Little Mermaid”, “Snow White and the Seven Dwarfs”, “Peter and the Wolf”, “Aladdin” and “Beauty and the Beast”. The latest scene to be added was one based on “Tangled”, in 2010.

The major difference between the original attraction and Disneyland Paris’ version is that no guide accompanies guests to provide a commentary during their journey. Instead, the soundtrack consists of music from the movies and a limited amount of dialogue (primarily in French).

20 boats operate on the canal, allowing the ride to accommodate a large number of riders per hour. However, it is frequently closed during the off-season and usually shuts down early in the evening on the days when it does operate. 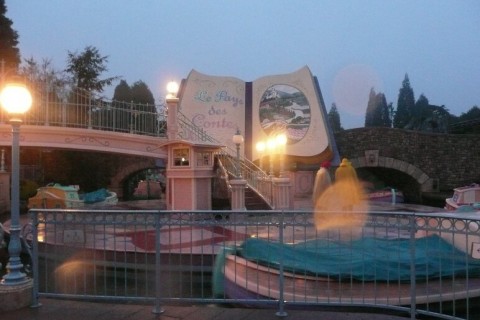 Submitted by SparklinDiamond on Saturday, April 11, 2015.

I personally love this ride and have done since I first went on it aged 3. Yes most people will see this as boring and pointless, but I see the positives. I love the fact that everything on this boat ride (all the disney movie scenery) is child sized. It is just the perfect height and perspective for children to particularly enjoy. It is very relaxing and a great ride to hide away from the hustle and bustle of disneyland. The scenes are also quite unique to the usual disney movies the parks forcus on, for example : Fantasia, sword in the stone, and even the wizard of oz get a mention here.