Named after NASCAR racing legend Dale Earnhardt, this new-generation B&M Megacoaster sends riders over perfect parabolic hills and helices with incredible twisted turns. At over 200 feet tall, it joins its fellow parks' Megacoasters amid the list of the best twenty-first century thrill machines. 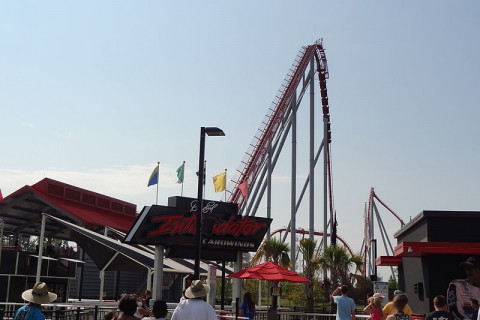 See all photos of Intimidator

Carowinds' Best - What a Rush!

Submitted by Anonymous on Monday, October 7, 2013.

For the longest time, Carowinds Theme Park (located on the border of NC/SC) prided itself on having a number of roller coasters, unfortunately most of them were slow, weak, and extremely outdated. Things began to change for the much-better when they brought in the Top Gun coaster (today renamed as "Afterburn"), and now that "much-better" has gotten even better than that within the past 2-3 years with the addition of the ultra-coaster "The Intimidator".

Intimidator is fittingly named for several reasons. (1) It is based on one of the all-time great NASCAR racers, Dale Earnhardt (his nickname) and (2) to see it, particularly it's first major drop.....is to be intimidated. That is, if you're hesitant about roller coasters in general, or hesitatant about ones that go so high with so big a drop.

Fortunately for me, I'm not hesitant in either respect and I LOVE the Intimidator. Not only is it THE best ride in the entire park, but it is a tremendously fun and thrilling coaster in and of itself, truly.

There's nothing like the rush of adrenaline as the train slowly pulls out of the station and there you are, sitting in these seats with seemingly little holding you in place and you make you make you way up to the 232 ft peak. Then, as it slowly crests over the hill, you feel yourself holding your breath as that 211 ft drop is suddenly...RIGHT THERE. Then.....you rush down at 75 mph through it and up and down and all around the 5316 ft long track, feeling slightly weightless (which is an exhilarating sensation) as you get to the top of the smaller hills and race through those to the end.

Another good aspect of this ride is that although it's extremely popular and it looks like the line may be ridiculously long, it's a fairly quick wait in line if they have all 3 trains going. So if you're talked into riding, you really should go for it and not chicken out....but if you're going to chicken out, you'd better do it quick.

Intimidator is a great addition to Carowinds and a major step forward in terms of ride quality there.

Submitted by Anonymous (not verified) on Monday, September 16, 2013.

This is a great coaster for the entire family. It has been in service for several years at this point and is still running smooth. There is a great deal of hang time on this coaster. My youngest daughter (11) loves this one, she swears the front is slower than the back. I would definitely suggest waiting in line to be in the front, best seat in the house!