Alton Towers' "new" ride for 2016 is a major overhaul and retheme of the existing Air roller coaster. The Bolliger & Mabillard Flying Coaster has been at the park since 2002, but will become an almost entirely different experience as it is renamed Galactica.

Virtual Reality technology will be employed, with headsets attached to riders' seats. With those safely in place, guests will experience a "flight" into out space, with the movements of the coaster being synchronised to what they see on screen (certainly a novel way of overcoming criticisms that Air's landscaping is dull and uninspiring). A number of different destinations will be on offer, with guests able to choose which one to head to.

Guests will still be able to choose the old Air experience, riding without a headset, should they wish to. 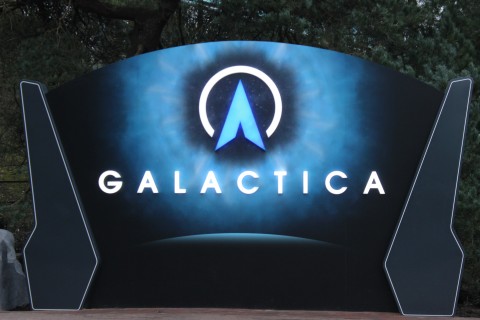 See all photos of Galactica

Galactica - Not quite the reality of virtual reality on roller coasters.

Galactica is a solid overall experience, showcasing would could potentially be the future of roller coasters. On the other hand however, it's an oddly thought out gimmick that has executed any possibility of the ride sustaining acceptable levels of throughput that its previous incarnation was able to deliver, whilst also harming any form of re-rideability it previous had.

The beauty of Galactica is the little details, the logo paving at the entrance, the re paint of the rocks that contributed to the previous oasis theme bestowed upon Air, even the "departure" boards that are situated throughout the queue line and station building. They all combine to give Galactica a more outstanding theme than Air could ever muster.

With the lack of on-ride photos comes a queue line alternative, and thankfully not the bland and generic green screen procedure that you'd come to expect. Guests are invited to place their head into a dish mounted to a wall, having their face captured and inserted into a Galactinaut helmet with various space backgrounds to choose from.

Once inside the station building, the Galactica experience appears to wobble, as if disturbed on a tightrope walk. The sheer quantity of ideas that could have been executed to contribute to the theme inside simply don't exist, with only a projection on a wall to maintain the illusion.

Then comes the real issue with Galactica; the loading process.

The process is lengthy and tedious, arguably frustrating and potentially confusing.

The normal routine of exiting the train as soon as it arrives into the station and returns into the seated position is abolished, with riders instead made to wait until the headsets are cleaned. Once all four headsets on each row have been removed of any hygiene presence from its previous occupant, only then are guests permitted to exit the train, with the next set of riders invited to embark on their virtual reality adventure.

After pulling down your restraint, you must wait for the host to remove the headset from the velcro pouch attached to the restraint, regardless of how many times you've ridden and how experienced with the headset you may be. The headset itself is clunky, heavy to wear and the focus wheel is irritatingly hidden under a flap at the crown of the device.

After various instructions and waiting for the device to be calibrated, finally Galactica can show off its crown jewel. The visuals are stunning throughout the ascent up the lift hill, with the audio building tension. The whole experience feels meticulously thought out and recorded, with an outstanding quality as the ultimate product. Until you reach the top of the lift hill, that is.

The remainder of the ride is various small segments of video hastily edited together to make what should be a grand flight through space, into very quick and poor jaunts through different environments, leaving a bitter and underwhelming taste in the rider's mouth as the ride navigates its all too familiar layout. It does make the ride seem longer, up until the rushed and anti-climatic ending. At no point past the crest of the lift hill was I left with a sense of awe or fizzing excitement about the potential of virtual reality.

As the first roller-coaster fully dedicated to VR, it leaves a lot to be lived up too should any other theme park boldly take the step into producing their own. It would definitely suit a longer ride, much like Europa Park's execution of virtual reality on Alpenexpress which felt superior in the long run. Had the same quality of the lift hill segment of the video been sustained throughout, then Galactica would have been greatly superior offering.

As a ride experience on the whole, Galactica offers something very different and unique. Its Helix-esque soundtrack is graceful, spirited and exciting, and the synchronised launch portal theming element is a magnificent sight to behold.

As far as the VR element goes however, there is a lot left to be desired to truly cement a reality for virtual reality in the future of theme parks.