Duel: The Haunted House Strikes Back! At Alton Towers

Alton Towers first opened its Haunted House ride back in 1992, with legendary designer John Wardley being handed responsibility for creating it. Using a people-mover system from Mack rides that enables a rapid throughput of guests, the ride was packed full of jump-out scares but remained aimed squarely at a family audience.

With attendance dropping, Alton Towers opted to revamp the attraction in 2002. The exterior remained much the same, but inside a new laser gun system was installed and the ride was renamed Duel: The Haunted House Strikes Back!. The backstory, told through videos which guests can catch a brief glimpse of in the extensively-themed queue, is based around the disappearance of a genetic surgeon who once lived in the house. His experiments on the dead have resulted in army of gun-wielding zombies attacking it - and guests are asked to blast them back into the grave.

Riders score points by shooting at glowing targets, some of which are located on zombies and other monsters, but many of which are simply glued to the wall. The large number of targets can result in an aching trigger finger at the end of the ride, but competitive spirit usually sees guests continuing to blast away until emerging back into the station.

Photos of Duel: The Haunted House Strikes Back! 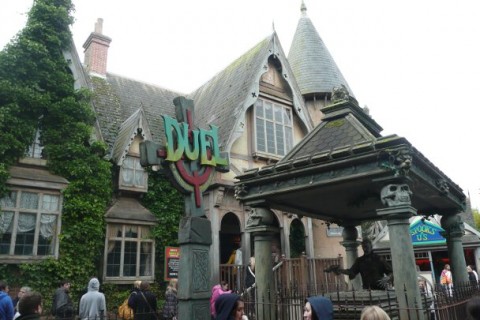 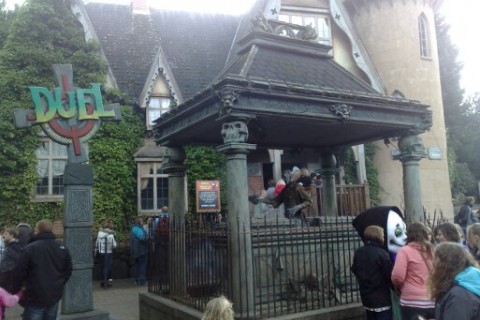 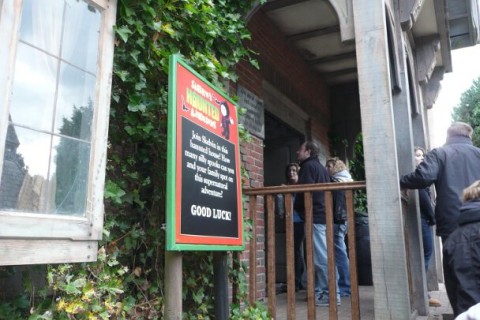 See all photos of Duel: The Haunted House Strikes Back!

Reviews of Duel: The Haunted House Strikes Back!

Submitted by SparklinDiamond on Sunday, December 28, 2014.

I absolutely loved this ride! It was very unique to anything I'd be on before, kind of reminiscent of a lower key Buzz Lightyear Space Ranger Spin from Magic Kingdom. The shooting concept is one I always love in rides, as it gives you that interactive element that if fun again and again. I also love ghost train rides or horror themed rides, and this was both in one. I adored the fact that when you shot a target generally something would jump out or move. We re-did this ride a few times and it seemed different everytime. It was so fun!

One of my favorites at Alton. I love getting on with my mum who screams her head off every time something jumps out at her (which means she's easy to beat ;) ) I do think though that the laser distracts you from some of the great elements of the ride. I swear every time I get on I notice something new! Sometimes I just forget the laser and sit back and watch, which is still just as good!

Submitted by Anonymous (not verified) on Friday, February 24, 2012.

Duel is probably the only ride in Alton Towers, which is not a roller coaster, that you would ride again and again, and again! Like similar rides across the pond in the United States, rides such as Men In Black and Buzz Lightyear, Alton Towers have themselves a winner transforming the once average haunted house ride into a zombie hunting frenzy.

However, if I were to critique the ride it would on the lines of lack of story-telling. In the pre-show you watch TV telling the contextual story, but this isn't flaunted enough. I think the ride misses a trick on that front. Despite that, Duel is very enjoyable and consistent to Alton Towers' hauntingly mysterious character.