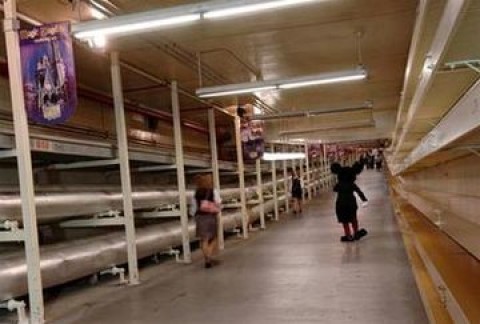 Have you ever felt like you were ten feet off the ground? If you’ve ever visited Magic Kingdom at Walt Disney World, you should. One of the not-so-hidden park secrets is that Main Street and the other major throughways at the park don’t reside on the ground floor. Instead, Walt Disney planned a different tactic for his second theme park, one that improved on the ideas of his original one at Disneyland.

Whenever you walk around Magic Kingdom, you’re actually at least 10 feet above the ground, effectively walking on the second level of the park. In fact, certain parts of Fantasyland start at the third floor, and Cinderella Castle is even one of them! The explanation for this architectural phenomenon dates back to the early days of the world’s first theme park, when a chance sighting fundamentally altered Uncle Walt’s thinking about the design of his structures.

From that day forward, the brilliant content creator developed new tactics for handling the flow of traffic. More importantly, he plotted major changes in how cast members act and interact during their shifts as well as afterward. While Disney didn’t live to see the culmination of his vision, his Imagineers honored his wishes by building the labyrinthine maze that functions as the unknown epicenter of Magic Kingdom. 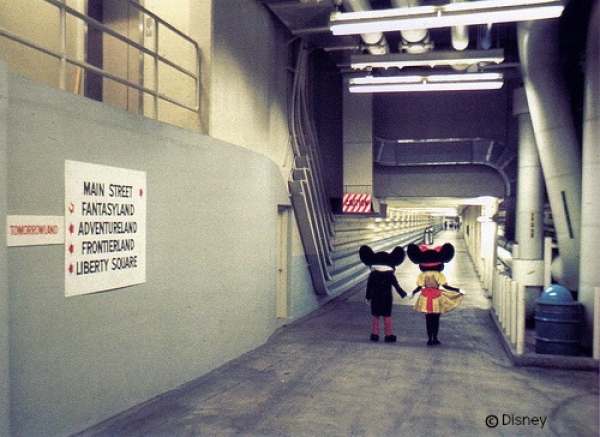 You may not know much about utilidors, but they’re a key reason why a cast member can quickly fulfill your wish, respond to a crisis, or even make their way to a shift on time. From the Meta perspective, they’re also integral to Disney’s ability to keep the illusion of its various themed lands intact without incongruous sightings of inappropriate characters. Utilidors are the magic unseen that holds everything together.

Since utilidors are such a mystery, plenty of questions exist. Why did Walt Disney feel the need for them? Why was Florida capable of them when California wasn’t? How do they work and what other secrets reside inside? Can you as a non-employee get a look at utilidors on your own? Let’s answer these and many other questions as we open the doors to the puzzling first floor of Magic Kingdom, the place that Disney never shows in its brochures. 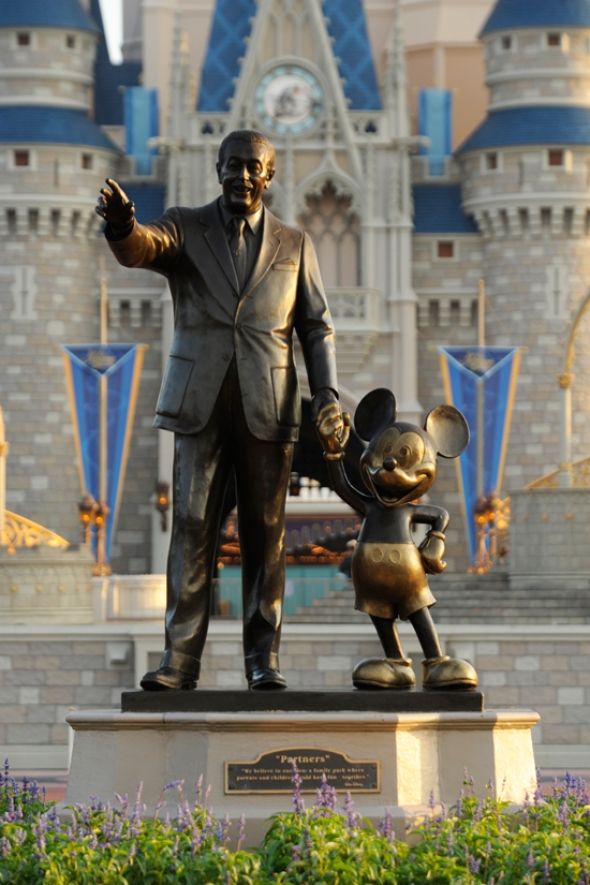 Some cynics maintain that the story is apocryphal. They think that the incident never happened, but it gets repeated anyway since it’s better than the truth. Whether they’re right or not is irrelevant. That’s because I like the story so much that I choose to believe it, like so many great Walt Disney anecdotes.

When the creator of Disneyland unveiled his plans for the themed lands that would comprise the totality of the park, he stressed the themes almost obsessively. In his mind’s eye, the stories that he’d told subdivided into a few specific categories. He held this idea for so long that he even compartmentalized Disneyland, the early 1950s television series that pre-dated the park. Four fields summarized his storytelling philosophies on the show.

Fantasyland is the subject of much of early Disney animated fare, the type of stories we see today on ABC’s Once Upon a Time. As Disney stated, “Here is a land of imagination, hopes and dreams.”  Frontierland was a throwback to the exploration era of American history, the time when pioneers like Davy Crockett could accomplish anything as long as they had access to a trusty weapon and a working ship. Disney described this land that many believed was his personal favorite as “A tribute to the faith, courage and ingenuity of our hearty pioneers who blaze the trails and made this progress possible.” 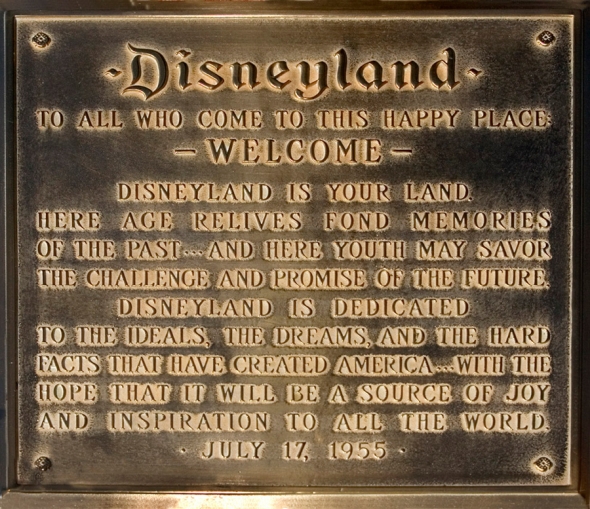 The other two sections from the ABC series were Adventureland and Tomorrowland.  The former would convince would-be adventurers that they were touring the most exotic parts of the world. "We pictured ourselves far from civilization, in the remote jungles of Asia and Africa." Tomorrowland required more imagination. It allowed Disney storytellers to dream of a better tomorrow and then build a plausible path to that goal. "Tomorrow offers new frontiers in science, adventure and ideals. The Atomic Age, the challenge of Outer Space and the hope for a peaceful, unified world." He was right, of course, but that’s hardly a surprise when speaking of Walt Disney.

When park planners readied Disneyland, they added a fifth themed area. Named Main Street, U.S.A., it was the one most befitting of a proud patriot whose war efforts had greatly aided the Americans in their World War II struggle. He loved the idea of a turn of the (20th) century re-creation of small town Americana, a place where everyone would feel at home. As he stated at the dedication, “Main Street, U.S.A. is America at the turn of the century — the crossroads of an era. The gas lamps and the electric lamp, the horse-drawn car and the auto car. Main Street is everyone's hometown, the heartline of America."

Reading the above, we can draw an unmistakable conclusion. Walt Disney poured his heart and soul into each themed land, making sure that the sections had individual identities that would hypnotize guests into buying into the illusion. They’d feel as if they were Davy Crockett for a time and then a bold explorer traveling on the world’s snarkiest boat.  Only moments later, they’d feel swept away to a storybook fairy tale and end the day feeling as if they’d walked into the future.

Imagine the frustration Walt Disney must have experienced when the (possibly fake) incident happened.

There the creator of Disneyland stood, admiring the majesty of his achievement. Suddenly, he witnessed something that caused him to gulp. It was so out of place in his carefully structured system that he felt confident his guests would also notice it, thereby ruining his carefully themed area. Right in the middle of Tomorrowland, a cast member in a Frontierland cowboy costume strutted down the street. Someone from the 19th century was strolling through the 21st century. It was themed land culture shock. 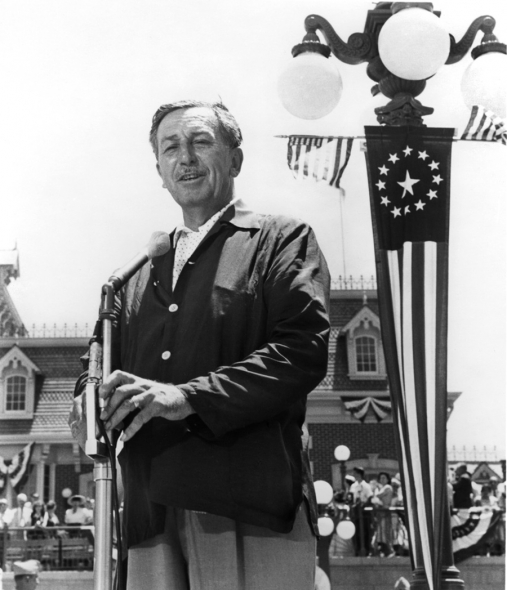 Disney had spent virtually the entirety of his fortune on his Disneyland concept. He’d even sold his dream house to finance the venture. Every detail mattered to Walt Disney, and this perfectionist bristled at anything in his parks that ruined the illusion for his guests. When he saw a cowboy standing in Tomorrowland, he had an epiphany.

The design flaw with Disneyland was that everything took place above ground. Cast members were visible to guests as they walked to their jobs. The only option was for them to wear regular clothing until they were at their assigned work station and then change there. Even that wasn’t ideal. The real estate at Disneyland dictated that everyone involved, guests and employees, followed the same paths to get to their destinations.

That cowboy in Tomorrowland changed the entire construction of Magic Kingdom 15 years later, even if he didn’t exist. From that moment forward, Walt Disney spent a great deal of time plotting ways to prevent one of the core flaws of Disneyland’s design. When he discovered cheap land in Orlando, Florida, one of the aspects of the acreage that appealed to him was its unique water table. Critics derided the region as swamp land. Where they saw useless territory, he saw opportunity.