The Best Blazing Fast Steel Roller Coasters in the World

The best steel roller coaster in the world is always a moving target. What once seemed unprecedented quickly becomes the standard that new constructions attempt to supersede. Think about the situation from the perspective of the builder. Why would you spend thousands of man-hours and millions of dollars crafting a ride that something else has already outdone? Since no sane person would, roller coaster records are made to be broken, and thrills are heightened in the process.

Each year, Amusement Today celebrates the finest coasters in the land, recognizing the best of the best. Their methodology in determining coaster supremacy is a bit controversial. They poll coaster enthusiasts around the world, attempting to garner opinions from people in all regions. The aim is to neutralize bias, leading to a reputable vote on coaster greatness. Critics note that it is subject to bias, especially when some theme park operators politic for votes from participants.

At the same time, the industry’s most important players, Disney and Universal, largely ignore the competition. That’s why they rarely place high in any category. Instead, less heralded but similarly entertaining parks like Six Flags, Dollywood, and Busch Gardens receive some hard-earned love from coaster critics. This year’s list of the seven best steel roller coasters contains only two new entries, but the order has changed dramatically, including a new number one. Without further ado, here are the best steel roller coasters for 2017.

After narrowly missing the top seven last year, Leviathan earns its well-deserved spot this year. It joins the selections in sixth and fifth place as sharing the same coaster designer, Bolliger & Mabillard. Since they also built the first place ride, more than half of the attractions on this list owe their popularity to the Swiss architects. Leviathan is the second newest of their rides chosen in the top seven.

Built in 2011 and 2012, the coaster opened to the public on May 6, 2012.  It instantly became one of only a handful of Gigacoasters in the world, as well as the only one in Canada. Leviathan soars to heights of 306 feet in the air. More impressively, they designed a drop that is 306 feet as well, and it descends at a staggering 80 degrees. Due to the dynamic drop, the ride quickly accelerates to speeds as high as 92 miles per hour, making it one of the eight fastest roller coasters in the world. In Canada, Leviathan reigns supreme as the greatest coaster in the country, and all it cost was a measly $28 million. 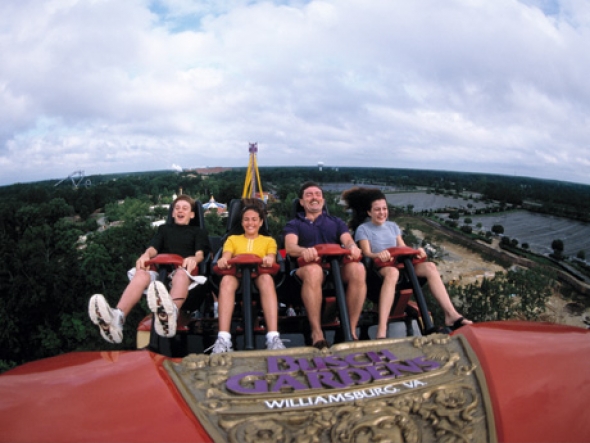 The second Bolliger & Mabillard entry on this list is their oldest. Built in 1999, Apollo’s Chariot has stood the test of time for almost 20 years now. Its longevity in maintaining place on this list is a testament to its architectural triumph. This is the only 20th century steel roller coaster on this list. And it has also experienced resurgence in popularity in recent years. It was a perennial top five selection in this category for years but then fell a bit. Now, it’s on the cusp of the top once again.

What’s the appeal of Apollo’s Chariot? Beyond the mythic name (literally and figuratively), it’s a track 4,882 feet long with speeds upwards of 73 miles per hour. It also claims the odd metrics of being 170 feet tall yet offering a 65-degree drop of 210 feet. There’s a marvel of physics for you. In 135 seconds of ride time, the theme park tourist will experience 4.1 Gs, with the sensation occurring in a coaster cart that seems a lot like an executive chair. You’ll never feel more comfortable as you zip along eight hills full of bunny hops. For the body of 20 years, this one has stood as one of the best air-time rides in America. That’s why a ride that opened a week before The Matrix continues to receive such praise today.