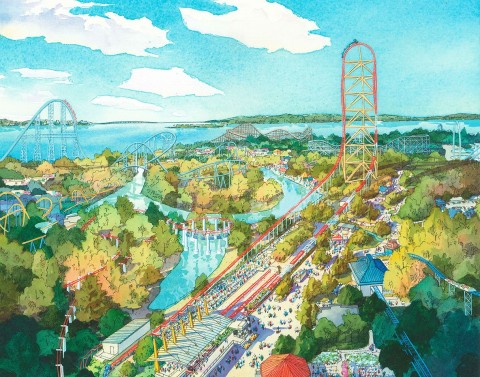 Across the world today, there are only so many roller coasters that can genuinely be described as “icons”; rides recognized across the globe; known by their silhouette alone; forever emblazoned in the record books; renowned by generations, and even living on as legends beyond their time… From The Beast to Millennium Force; the Incredible Hulk to Nemesis; X2 to Lightning Rod; Steel Vengeance to El Toro… These are rides so renowned, the mere mention of them conjures images in the minds of coaster enthusiasts the world over.

Looming over that pantheon of iconic, landmark coasters is a record-setting ride that topped many thrill-seekers' bucket lists: Top Thrill Dragster. Opened in 2003, the world’s first “stratocoaster” shattered expectations and pierced through the 400-foot coaster height record like it was tissue paper. And today, less than 20 years later, it’s officially set to spend a year in the most dreaded of coaster conditions: standing-but-not-operating... for now.

How did Top Thrill Dragster launch onto the scene? What is it like to launch from 0 to 120 miles per hour, then rocket 420 feet into the sky? And more to the point, what brought the world’s one-time “tallest, fastest” roller coaster to an unexpected pitstop that many expected to be the final wave of the checkered flag until Cedar Point’s surprising announcements in 2023? “Arms down, head back, and hold on…”

To understand Top Thrill Dragster’s pedal-to-the-metal start (and its potential finish), you have to understand the world it was born into. For many of us, the 1990s will forever conjure images of Tamagotchi and Furbies; Britney Spears, Backstreet Boys, and Beanie Babies; the Slime Geyser outside of Nickelodeon Studios. But when it comes to amusement parks, the 1990s are defined by a singular, global battle for thrill-ride supremacy: the Coaster Wars.

You have to imagine that – before the ‘90s – roller coasters (and amusement parks in general) were only just re-emerging in the public consciousness after a half-century slumber post-Great-Depression. By the ‘70s and ‘80s, new "post-Disney" parks were popping up across the United States, and the “Second Golden Age of the Roller Coaster” has begun, with cutting edge steel roller coasters spreading around the globe.

Of course, the industry was dominated by Arrow Dynamics – a coaster manufacturer whose remaining steel installations are pretty immediately identifiable as… well… “classics.” Arrow’s mine trains, Corkscrews, and multi-loopers still dot the globe, but frankly, each pretty quickly betrays that it was developed in an era before computer simulations. (Unusual banking, ramrod-straight drops, discombobulating forces, and snappy transitions are cornerstones.)

Still, Arrow was the first to crest the 100-foot height barrier (with Cedar Point’s racing Gemini in 1978), then, just a decade later, the 200-foot height barrier. That landmark ride – Cedar Point’s Magnum XL-200 (above) in 1989 – undoubtedly represents a pivot point for the industry. On one hand, Magnum marked the end of Arrow’s industry dominance, and certainly the limits of its height and speed… But on the other hand, the record-breaking thrill machine served as the start of a new era…

By the late ‘80s, new players in the coaster manufacturing industry had begun to produce a new generation of steel coasters that read as much more modern builds compared to the herky-jerky Arrow Double Loops of yesteryear.

As the ‘80s gave way to the ‘90s, two narratively-inseparable new industry leaders stepped into the spotlight with precisely-engineered, mathematically-calibrated, and high-octane coasters that became the de facto installations at SeaWorld, Busch Gardens, Merlin, Cedar Fair, and Six Flags parks, fueling an era of ravenous expansions based on new-age thrills…

It seems that any self-respecting amusement park in the ‘90s (and unto today) needs a Bolliger & Mabillard (B&M) coaster – be it a sitting, hyper, wing, dive, inverted, or even stand-up.

Where Magnum XL-200 had shattered the 200-foot height barrier in ‘89, now B&M churned out 200+ foot “hypercoasters” like an assembly line beginning with 1999’s Apollo’s Chariot and quickly spreading through thrill parks in the 2000s like wildfire. B&M’s thrilling yet crowd-pleasing collection of consistent, quality rides is legendary. (Just one has ever been fully removed – Dueling Dragons at Universal’s Islands of Adventure.)

While some coaster aficionados accuse B&M of churning out a generation of “cookie cutter” clones, B&M has an unrivaled commitment to high-efficiency, high-capacity, and high-reliability. (For example, the firm famously agreed to build the Incredible Hulk Coaster at Universal’s Islands of Adventure, but only if Universal found someone else to develop and install the launch system, preferring to stick to tried-and-true, low-tech, gravity-powered coasters.)

If B&M is the industry’s premier provider of tried-and-true, reliable, and widely-appealing commercial behemoths, that’s a pretty vast divergence from the other ‘90s mainstay…

Another Swiss manufacturer, Intamin AG, took a very different path into the Coaster Wars, launching (pun intended) cutting-edge (and often, temperamental) ride systems. In 1997, Intamin developed Superman: The Escape at Six Flags Magic Mountain, using cutting-edge linear synchronous motors (LSM) to send coaster cars screaming down launch track at over 100 miles per hour, then tearing skyward in a 300+ foot vertical climb and backwards fall. Of course, it opened a year after planned, due to technological difficulties.

From there, the company produced a number of its own sitting and inverted coasters, but unlike the swooping, widely-appealing creations of B&M, Intamin’s tend to be more intense, acrobatic, sleek, and serpentine with unique lift and launch systems.

In 1998, the company produced the Lost Legend: Volcano – The Blast Coaster, an inverted, multi-launch ride catapulting riders to 70 miles per hour in seconds, blasting vertically out of a fire-belching peak. (Volcano missed its first summer season, too, and eventually opened by only half-filling trains to ensure the coaster could make it out of the mountain).

Put another way, there was nothing “cookie cutter” about the Intamin that had developed by the mid-’90s, which increasingly was willing to push to boundaries in pursuit of intense, groundbreaking, and monumental new rides… coasters designed for parks that were serious about the Coaster Wars, and about record-breaking, industry-shaking experiences… even if at the cost of efficiency and reliability. For example…

Though Arrow had cracked the glass ceilings of 100- and 200-foot tall coasters in the ‘70s and ‘80s, no one could’ve carried the torch forward but Intamin… and to that point, no park could’ve broken the 300-foot barrier than the one that had broken the other two: Cedar Point.

A one-man army in the Coaster Wars, Cedar Point was practically built to be “America’s Roller Coast.” Situated on a peninsula jutting into Ohio’s Lake Erie, the century-old thrill park began like so many classic American amusements – a Victorian “picnic park” equipped with a Dance Hall, Carousel, and classic Scenic Railway – before the coaster boom of the ‘70s and beyond began its modern transformation.

When Millennium Force opened in 2000, it was unlike anything the world had seen. Cresting 300 feet over Lake Erie (with views of Canada on clear summer days), the blazing blue rails of parabolic airtime hills, slaloming runs, overbanked turns, and relentless, tear-jerking speed, the ride was a force to reckoned with.

And in stark contrast to the analog Magnum, Millennium was all-digital; a streamlined, bold, intense, butter-smooth ride with undulating rainbow lighting, a metallic station, and a looping electronic score. The ride remains the most iconic and beloved of the still-surprisingly-few 300+ foot “gigacoasters” on Earth.

True to its name and to Intamin’s fashion, Millennium Force also had a future-facing element that trusty B&M would never touch. To achieve a steeper-than-normal 45-degree lift hill, it uses a cable-based lift mechanism rather than a standard chain lift and anti-rollback. An elevator cable latches onto the coaster’s train while it’s parked in the station, rapidly and effortlessly pulling it up the 300-foot hill at a brisk 22 feet per second.

The 25-second climb to the ride’s peak may be exhilarating… but it’s got nothing on Intamin’s most breathtaking innovation ever. Read on as we explore the world’s first stratocoaster…

Top Thrill was awesome. Hate to see it go. Millenium is the best coaster at the Point, but the best in the world is no doubt Fury 325. No one asked me, so I know....

Top thrill dragster is a cool ride, lots of speed, but nothing really too incredible. Mellinium Force, and Maverick and to a degree the Magnum are really better rides than Top Thrill Dragster, oh and you can't forget Steel Vengeance. I would be more upset if they got rid of The Maverick, then Top Thrill.....now Iron Dragon...that's a coaster that can go!