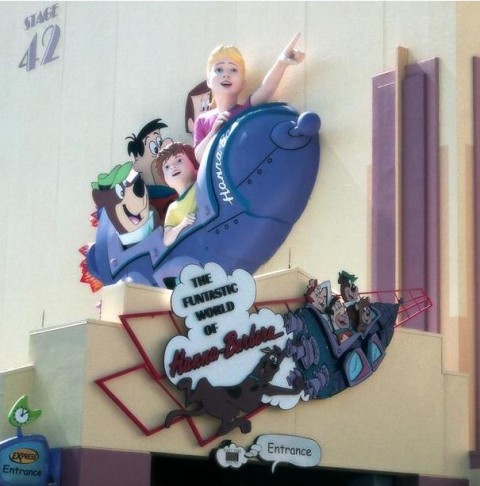 During the early days of Universal Studios Orlando’s operation, Nickelodeon held a far stronger presence in the park than it does today. Back in the late 90s and early 2000s, Nickelodeon had opened the “world’s first headquarters for kids”, the on-site Nickelodeon Studios inside Universal Orlando. Some shows were filmed live on the studio’s soundstages, and kids nationwide came to visit the iconic green slime geyser.

With the popularity of cartoons growing with younger audiences in the early 2000s, the park was looking to expand further and introduce more popular attractions to its roster. This came in the form of a much-needed ride overhaul to one of the already existing attractions on site.

In 1990, the Funtastic World of Hanna-Barbera–a motion simulator ride created by Intamin–opened with the park in the Production Central area. The ride featured familiar faces from older cartoons such as the Flintstones, Scooby-Doo, and Yogi Bear. It was the first motion simulator ride to open in Universal.

As guests proceeded through the queue, they were informed that Dick Dastardly and Muttley, a duo of villains, were seeking a role in the next Hanna-Barbera project. When they were denied the request citing The Jetsons were the next project to be featured, Dastardly flew into a fit of rage, kidnapped Elroy Jetson, and threatened to take him where he could never be found again. Yogi Bear and Boo Boo would then encourage guests to join them on a high-speed rocket chase through classic cartoons.

After the riders’ rocket is launched from a giant slingshot, they are transported back in time to the town of Bedrock, the home of the Flintstones. While in hot pursuit of Dastardly, guests flew past familiar faces such as Fred Flintstone, Barney Rubble, and their wives before flying upward into the sky and being transported through a second portal.

This time, the rocket charges past the Mystery Machine and into a haunted house the gang is exploring. Through twisting corridors and spooky hallways, the rockets give chase, narrowly avoiding collisions with Shaggy and Scooby along the way. Another portal opens and takes the riders to Orbit City, the home of the Jetsons. While weaving through flying cars and other futuristic technology, Elroy Jetson spots his family and attempts to jump from the ship and into their arms, but is promptly stopped by Dastardly and pulled back inside.

The Jetsons join the chase, and thanks to Rosie the Robot’s extendable arms, Elroy is reduced and reunited with his family. Meanwhile, Dastardly and Muttley are apprehended by the futuristic police force. After being thanked by the Jetsons for the successful rescue mission, the riders are sent through one final portal where they are brought back to the real world. The rocket comes to a halt and the riders are thanked one last time by Yogi Bear.

The ride’s gradual decline in popularity over the years resulted in its eventual closure on October 20, 2002, after twelve years of operation. On April 11, 2003, the newest addition to the Universal lineup was opened to the public–Jimmy Neutron’s Nicktoon blast. Following the success of the 2001 film Jimmy Neutron: Boy Genius, Universal was looking to expand Nickelodeon’s influence inside the park.

Nicktoon Blast followed a similar structure and plot as the original Hanna-Barbera attraction, but rather than classic cartoon characters, the ride utilized well-known Nickelodeon cartoons. Instead of chasing Dick Dastardly and his companion Muttley, riders would board the ride and pursue Ooblar, the right-hand man of Goobat, king of the Yolkians, after he stole Jimmy’s high-powered rocketship the Mark IV...