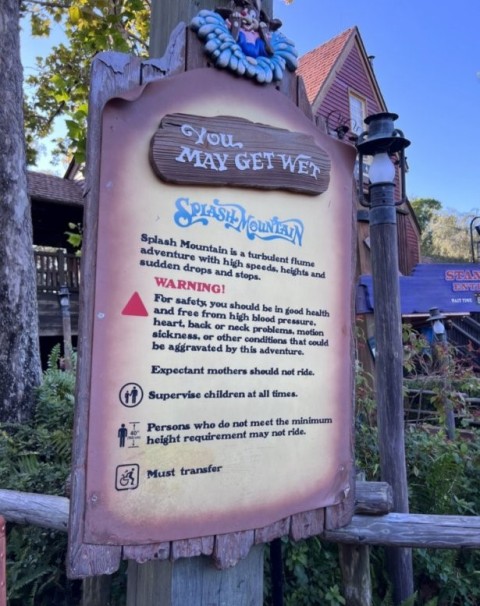 The key ingredients of an incredible Disney attraction are immersive theming, entertaining characters, and perhaps, a dash of thrill. The Disney company has perfected the art of creating impeccably themed attractions, and one attraction specifically has delighted guests for years with its great mix of these key components.

The History of Splash Mountain

Splash Mountain is based on the stories of Br’er Rabbit, Br’er Bear, and Br’er Fox from the controversial 1946 film Song of the South. While Song of the South has been met with criticism over the years for its grossly inaccurate depictions of slavery, Splash Mountain only utilizes the animated characters from the stories told within the movie along with a handful of songs such as “Zip-a-Dee-Doo-Dah” and “Ev’rybody’s Got a Laughing Place.”

The ride tells of the story of Br’er Rabbit setting off to look for his Laughin’ Place. However, Br’er Fox and Br’er Bear follow Br’er Rabbit in an attempt to catch him. They encounter several mishaps in their attempts until they finally trap Br’er Rabbit in a beehive. However, Br’er Rabbit convinces Br’er Fox to throw him down into the Briar Patch. This part of the story is enacted by riders plunging down the five-story drop into the Briar Patch. In the end, Br’er Rabbit has made his escape and all the animals of Doo Dah Landing rejoice and Br’er Fox and Br’er Bear are left to deal with Br’er Gator. There are dozens of singing audio-animatronic animals including geese, frogs, raccoons, possums, bees, and more.

The three versions of Splash Mountain are similar in that the overall story is the same. Each version varies slightly in how many drops it has, how long the ride duration is, and the order in which the story events are told. While both the Disneyland and Magic Kingdom versions are set to be rethemed in the coming years, any retheme of the version at Tokyo Disneyland has yet to be announced. Let’s explore the history and differences of each of these iterations.

The Original Splash Mountain at Disneyland

Splash Mountain at Disneyland is the original iteration of this attraction. The idea of Splash Mountain was conceived while Imagineer Tony Baxter sat in traffic in 1983. He wanted to come up with an attraction that would not only bring more attendance to the unpopular Bear Country section of the park but also utilize the audio-animatronics from an also struggling attraction, America Sings. He wanted to create a log flume water ride attraction, but other imagineers fear that a log flume would be too dull for a Disney park. Tony Baxter came up with the idea of using the characters and songs from Song of the South.

Tony Baxter and a team of imagineers established plans for the Zip-a-Dee River Run attraction that would not only reuse the America Sings audio-animatronics, but incorporate scenes and music from Song of the South. The CEO at the time was Michael Eisner. He regularly wanted to use Disney Parks attractions to also promote other Disney projects. Eisner suggested changing the name of the attraction from Zip-a-dee River Run to Splash Mountain to promote the movie Splash starring Tom Hanks and Daryl Hannah. Eisner also thought the name Splash Mountain would fit in better with the other two mountains at Disneyland: Big Thunder Mountain Railroad and Space Mountain. Splash Mountain was officially announced in 1987.

The construction of this popular attraction would be not only long but also expensive. The final cost of Splash Mountain came in at around 75 million dollars. It was the most expensive attraction ever built at the time. To put this into perspective, the entirety of Disneyland cost only 17 million dollars when it was constructed in 1955. The ride was constructed mostly of concrete. Due to its large costs, the closure of America Sings and the utilization of its audio-animatronics was likely crucial. Near the ride completion, the log boats had to be redesigned as they were too heavy, which led to testing riders getting completely soaked rather than sprayed. Additionally, imagineers decided to change the name of Bear Country due to the inclusion of so many non-bear animals in the attraction. The land then became known as Critter Country.

Splash Mountain would open in Disneyland on the park’s 34th anniversary.  To celebrate the new attraction’s opening, Disney hosted a television special called Ernest Goes to Splash Mountain, where the popular character, Ernest P. Worrel (played by Jim Varney) would be the first volunteer to ride Splash Mountain. The ride was met with rave reviews and led to an increase in popularity for the Critter Country section of the park. Just as Tony Baxter had intended. Due to the success of the attraction, it wouldn’t take long for Disney to announce plans to bring the attraction to other theme parks...