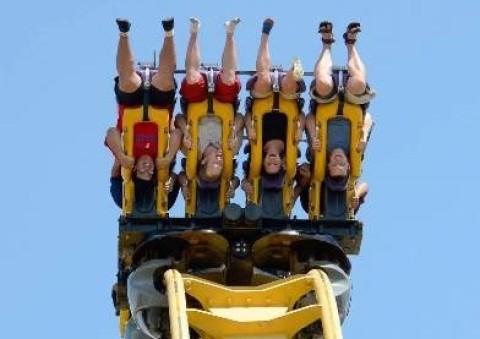 During the '90s, one of the most enduring battles of all time was waged right before our eyes: the Coaster Wars. As ride manufacturers and the most daring theme park operators raced to build taller, faster, and more extreme rides, thrillseekers found themselves surrounded in new record-breakers year after year. With unthinkable innovations, new ride technologies, and cutting edge coasters debuting, it seemed that the Coaster Wars Crown could be anyone's.

Today, most parks have calmed their quest to break records. It makes sense. After decades of focusing exclusively on thrillseekers, most operators "woke up" in the mid-2000s to find that they'd kind of forgotten everything else you need to operate a great park – like, y'know, restaurants and shows and family coasters and dark rides... Oops.

While the breakneck speed and ultra-extremes of the Coaster Wars may have quelled, if you're up to tackle some of the icons of the era, look no further. Here's our suggested Bucket List for roadtrip-ready ride warriors who want to ride through history and experience landmarks of the Coaster Wars firsthand...

Probably the ride most reliably called the start of the Coaster Wars, Batman: The Ride was a revolution. Though it was actually the fourth coaster designed by then-newcomer Bolliger & Mabillard, their first three had all been stand-up coasters. But – at the request of the general manager of Six Flags Great America – their next was something entirely new. Sure, coasters had hung beneath the track before, via Arrow's swinging and swaying suspended coasters. But B&M's inverted model was an action-packed, high-intensity, inverting thrill machine with all of B&M's staples – a pre-drop, four-across seating, wild inversions, and post-Arrow smoothness.

Believe it or not, there are twelve identical copies of Batman: The Ride around the globe (and seven of them carry the "Batman" name). Each is a coaster fans' dream – if only because the tight inversions, low elements, compact layout, and high intensity represent the best of "early" B&M versus their modern tendancy to default to widely appealing, graceful, giant elements, and less-intense installations. But only Six Flags Great America's is the first, and the "shot heard 'round the world" for the Coaster Wars.

With B&M and Intamin bursting onto the scene in the early '90s, classic coaster manufacturer Arrow went on the offensive. After decades of being the big name in town – first with mine trains in the '60s, then Double Loops and Corkscrews as standards of the '70s, and multi-loopers of the '80s – the arrival of new manufacturers with big ideas pushed Arrow to innovate, too. The '90s saw some legendary flops from the company, including the Declassified Disaster: Drachen Fire – Arrow's best imitation of B&M's look and feel.

2002's X was supposed to be the company's magnum opus. X was an unheard of "4th dimension coaster" with riders cantilevered on either side of the track like a B&M wing coaster. The difference is that X's seats could also rotate (like a modern S&S freespin coaster). However, rather than freely flipping through the ride's course, a third rail embedded in the track controlled the exact direction riders faced at each moment of the ride, mechanically rotating seats foward, backwards, and upside down relative to the direction of travel.

With the opening of the ultra-complex coaster delayed for more than a year, Arrow ended up filing for bankruptcy, leaving the pink and yellow California coaster as their last. In 2008, a $10 million rebuild saw new trains designed by S&S (who inherited Arrow's assets) and special effects added along its course, yeilding its current name: X². An absolutely mind-bending experience, X² has to be ridden to be believed... and that's the power of the Coaster Wars.

For most of coaster history, "launching" trains look a whole lot of effort. In some cases, acceleration was achieved by spinning drive tires worn down by friction over time. In others (like Schwartzkopf's fabled shuttle loops), heavy counterweights would be dropped or tightly-wound flywheels released, rapidly pulling cables that likewise could fray, splinter, or snap over time due to friction. Premier Rides had an alternative: linear induction motors (LIMs).

The idea is simple. Attach aluminum fins to the sides or undercarriage of a roller coaster train. Line a portion of track with electric motors with a slot perfectly positioned for those fins to slide though. Because aluminum is magnetic only in the presence of an electromagnetic field, when the motors are powered, they'll magnetically attract the fins into the motors, then repel them out – a launch! Because magnetism is a non-contact force, there's no flywheel; no cable; no friction! Just a delightful "hum" of electricity as the motors activate and away you go.

Flight of Fear actually co-debuted at both Kings Island and Kings Dominion in 1996. LIM technology had never been applied to a coaster before, but now, LIMs and their sisters, LSM (linear synchronous motors) are tried-and-true, tested technology that powers most modern launched coasters. The power of electromagnetism allows for rolling launches and boosts that a wound cable and catch car never could, so without LIM and LSM technology, there would be no VelociCoaster, Hagrid's Motorbike Adventure, Pantheon, Cosmic Rewind, or Slinky Dog Dash as we know it.

Speaking of launches, though fabled ride manufacturer Intamin has technically been making roller coasters since the '70s (in fact, their first coaster might surprise you...), their first serious thrill coaster was 1997's Superman: The Escape at Six Flags Magic Mountain – the same park that would later host X, and was always a contender for the Coaster Wars crown. Superman: The Escape used LSMs (just a year after the concept's debut on Flight of Fear) to rocket guests to then-unthinkable height and speed.

Racing down a long straightaway lined with LSMs, Superman's carts (and twin tracks for higher capacity) accelerated from 0 to 100 mph before turning skyward and racing headlong 328 feet up a 415 foot tower before reversing and falling back to Earth. Superman is literally an icon of the Coaster Wars, and a huge entrance to the market for Intamin, who would continue with boundary-pushing, technological, and ultra-extreme experiences up to and including Superman's clear relative, Top Thrill Dragster.

Superman is very interesting because technically it's the first coaster to drop riders over 300-feet and 100 mph... but it's generally not considered a gigacoaster since it's not a full-circuit coaster, but a shuttle. Also interesting: because of the limitations of LSMs (relatively gradual acceleration needing lots and lots of motors), it takes Superman 7 seconds to reach top speed. (Which is why, for example, Intamin's Accelerator coasters like Top Thrill Dragster default to high-pressure hydraulic cable-launched systems to reach their top speeds more quickly.) In 2011, the ride was re-subtitled "Escape from Krypton" and its carts were reversed for a backwards launch and then a forward drop and return to the station (above). But this Coaster Wars icon is still going strong...

As is typical in B&M's playbook, they weren't the first to build a coaster over 200 feet tall (that would be Arrow, with 1989's Magnum XL-200 at Cedar Point), but they did master the model and make their version the standard across the industry. That started in 1999, with Apollo's Chariot at Busch Gardens Williamsburg. (That same summer, a second B&M hypercoaster – Raging Bull at Six Flags Great America – also debuted.)

Today, it seems like just about every major amusement park has a 200-foot-tall coaster with an out-and-back layout of airtime hills and bunny hops, and most of them are B&M's. But after all these years, there's still something special about Apollo's Chariot, which arcs gracefully over the forests of Virginia, dipping down and rising along hillsides in a graceful yet powerful ride. (It's also a perfect name – in Greek mythology, Helios carried the sun across the sky in his chariot each day, until his boastful son Apollo stole it, rising and falling chaotically as he scorched and froze the earth in turn.)

While Cedar Point's Magnum XL-200 was probably a major first spark of the Coaster Wars, B&M's popularization of the 200-foot coaster model made it attainable as a headlining ride across the globe, kicking off the mass manufacture of these thrill rides. So when you ride Apollo's Chariot, you really are riding history... and not just because it's the ride where Italian supermodel Fabio got hit in a face with a flying goose while taking the first ceremonial ride.