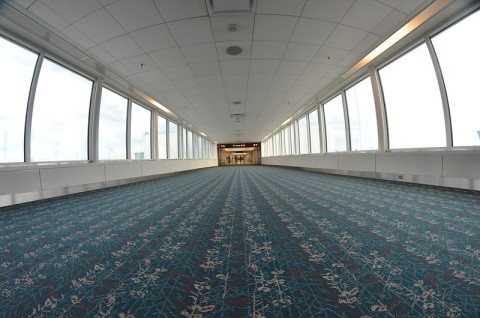 Orlando International Airport. For most theme park fans, it's the literal gateway to the Magic Kingdom; a waypoint to EPCOT; the official start of a Disney Cruise; a stopover en route to Universal Orlando... and at the end of a trip, the depressing portal back to reality. If you're reading this, you've probably passed through the Orlando International Airport yourself! But how much do you really know about "MCO" and how it connects to Disney World literally and metaphorically?

Today, we'll take a look at a few of the surprising stories you may not know about Orlando International Airport, as well as dig into the oddities and features of this airport that you know and love. Take your seats; place tray-tables in their upright and locked position, please, as we take off into the true stories of MCO... Speaking of which...

Have you ever wondered why the Orlando International Airport – with 27 letters, but no M and no C – got the airport code MCO?

Technically, the Orlando International Airport began its life in 1942 – long before domestic air travel was accessible to the public. That's because the property was Orlando Army Air Field #2, before being renamed Pinecastle Army Base in 1943. At the end of World War II, the property was even used for prelimary tests of the Bell X-1 rocket engine aircraft, which would later be relocated to Edwards Air Force Base in California where pilot Chuck Yeager would use it to break the sound barrier!

In the 1950s, Colonel Michael Norman Wright McCoy died in a crash at the base, and it was officially renamed in his honor – McCoy Air Force Base.

It wasn't until the 1960s that commercial air travel began to spread across the country, and given that early jetliners like the Boeing 707 required long, sturdy runways that the small Orlando Executive Airport (IATA abbreviation: ORL) down the street couldn't handle, the city of Orlando and the United States Air Force came to an agreement: they would share McCoy. The new joint civil-military facility at McCoy Air Force Base was launched in 1962, with the civilian operation branded the Orlando Jetport at McCoy.

Obviously, the opening of Walt Disney World in 1971 turned the Orlando Jetport at McCoy into a major hub for air travel. Plus, a draw down after the end of the Vietnam War meant that the U.S. military had dwindling use for McCoy. The Air Force formally exited the facility in 1975. Just as Disney was putting the finishing touches on its brand new Space Mountain and PeopleMover attractions, McCoy was formally renamed the Orlando International Airport, but retained its old IATA airport code – MCO.

For generations of Walt Disney World visitors, you know you've really arrived when you get to that "first ride" of the trip: the Orlando International Airport People Movers. These automated, elevated shuttles connect the airports four "airsides" to the main terminal (where ticketing, ground transportation, shopping, and dining are located), providing many arriving guests with not just their "first ride," but their first view of Central Florida's palm trees and sunshine.

Each of the airport's eventual five People Mover lines have come online corresponding with the associated airside they travel to and from. The first two opened in 1981 when the west side of the current main terminal and the first two airsides (today, containing gates 1 - 29 and 30 - 59) opened. A third airside (with gates 60 - 99) and its People Mover came online in 1992, at which time a shuttle station was built for the final airside (gates 100 - 129) even though it didn't open until 2000. A fifth route travels nearly a mile, linking to the new Intermodal Terminal where visitors will be able to transfer to the announced Brightline intercity rail system.

Like Disney's Monorail system, the shuttles themselves have been replaced and upgraded over the years, rolling out new stock on new lines. Currently, the two western terminals and the Intermodal line use newer Mitsubishi Crystal Mover trains; the two eastern lines use original Westinghouse CX-100 rolling stock, maintained by Bombardier – coincidentally, manufacturer of the Disney World's Mark VI Monorails.

Though the two eastern lines use older trains, there's a benefit to riding them: some of the messages on board are delivered by Jack Wager – "The Voice of Disneyland" – who you'll know from one of our quotes that all Disney Parks fans know: "Please stand clear of the doors." Wagner had initially recorded all of the audio for MCO's People Mover, and hearing him en route to Disney World is a great piece of continuity.

Obviously there's nothing particularly artful about the carpet itself – sort of abstract, leaf-like blotches affixed to vertical lines, creating straight vines of beige, mustard yellow, rusty red, and fern green layered against one another on a pine green background. Yet somehow, the pattern has come to exemplify Orlando. It's a happy sight when you arrive, and a tragic one when you depart.

And like all memes, it's truly taken on a life of its own. MCO itself has been known to award "carpet socks" to sweepstakes winners, social media followers, and as an honorary "trophy" for local celebrities. They don't sell the socks (despite the Butterbeer-sized gold mine they're sitting on) but plenty of Etsy, Redbubble, and Amazon sellers have their own versions, if you're sold on the sock hype.

As for how the Orlando International Airport's history interlaces with Disney World's? Read on...