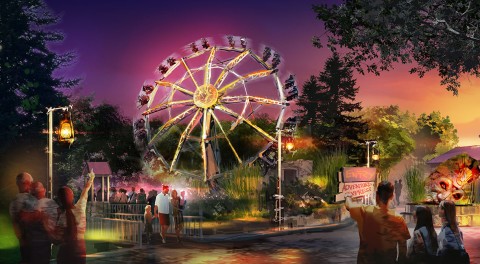 That became a major issue for fans when, in 2007, Cedar Fair purchased the Paramount Parks chain for $1.24 billion. Overnight, the thrill park company acquired a portfolio that included Kings Island, Kings Dominion, Carowinds, and Canada's Wonderland. While each counted coasters as its top draws, these parks were also more than midways. Through their origin in the '70s and '80s ("post-Disneyland"), all came equipped with themed areas, historic environments, hub-and-spokes layouts, park icons, special effects, and yes, dark rides that a theming-averse Cedar Fair needed to contend with. Early results were somewhat rough, with behemoth steel coasters dropped in quiet areas, generic ride re-namings, and several gut-wrenching closures.

But even if Cedar Fair was slow to embrace the world of theming (no doubt still riding the declining high of the Coaster Wars back in 2007), in recent years, Cedar Fair parks have shifted beautifully to have thrills and theme comingle. Recently, the company has weened off of its dependence on off-the-shelf B&M coasters in favor of personality-filled, customized creations like Mystic Timbers, Copperhead Strike, and Wonder Mountain's Guardian. Increasingly, coasters seemed to fit into the larger environments of the park, with stories and even scores all their own...

Now, in a post-Wizarding-World industry, that gradual bend toward theming and storytelling is leading to a new era at Cedar Fair's parks. Instead of fighting against the themed areas inherent in their acquired parks, the parks have embraced and even enhanced them! And why not? As proven by the Butterbeer model, per capita revenue can increase by exponents when guests can opt into "in-universe" dining, unique snacks, must-have collectibles, and merchandise that lets them join a story in progress. It's not just about rides anymore; it's about lands.

Maybe as proof-of-concept, last year, Kings Dominion re-launched one of its original "lands," leading us to dive deep into Jungle X-Pedition and how we thought the family-focused, story-based build-out could serve as a model for regional parks to go big on theming.

Turns out, we were right! Next year, four Cedar Fair parks will launch new or reimagined "lands," bringing more than just big, off-the-shelf coasters to their thrill-focused parks. These four lands all bring new flat rides and family-ready capacity, sure. But they also bring refreshed environments, new decorations, original restaurants, and yes, even storytelling that promises to continue Cedar Fair's slow wade into the world of theming. We can't wait for these immersive areas to bring a little theme back into our local, regional parks. Do you like this model, or do you wish these parks would stick to coasters?

Knott's Berry Farm is a Southern Californian treasure. Located just a few city blocks from Disneyland, the historic park counts itself as the first theme park in the country, dating back to Walter Knott and his wife Cordelia opening an immersive Californian "Ghost Town" next to their fabled chicken restaurant. Knott's has long been a showcase of Californian history and culture, with the original "Ghost Town" as its core and additional themed lands (like the Boardwalk, Calico, the Roarin' '20s, and Camp Snoopy) growing around it.

Though Cedar Fair acquired the park in the '90s, it still feels like something different with three substantial dark rides and spectacular history and theming. Of course coasters have been the name of the game since Cedar Fair's purchase, but Knott's has also tended to care more about its themed "lands" than any other park in the chain.

That continues in 2023 with the revitalization of the park's Fiesta Village (above) – a celebration of Southern California's Latin culture and food. Sure this is "just" a colorful, creative, and much-needed visual "plussing" to an existing area, but the reimagining of Fiesta Village is also the kind of essential reinvestment that it's too easy for parks to forget about.

The "new" version of the land will see everything refreshed, with "bright, colorful alebrijes and vibrant landscaping" spreading throughout the Fiesta Mercado. Flowers will grow across new arbors; flags strung down the streetscape; a new stage will take shape in the square; new lighting and paint schemes will overtake existing flat rides; new merchants will arrive to sell their authentic wares throughout the marketplace. It's all built around the Casa California – a full-service restaurant joining the park's legendary Mrs. Knott's Chicken Dinner Restaurant.

The "anchor" of the project is the modernization of Montezooma's Revenge – the classic 1978 Schwarzkopf shuttle loop coaster. Shuttered in February 2022, the historic ride could've been scrapped. Instead, it's being relaunched (pun intended) as Montezooma: The Forbidden Fortress, allegedly retracking the classic and installing new launch hardware that will randomize the ride's signature launch between forward and backward starts. While a nicely-themed area won't be groundbreaking for Knott's, this refresh looks like a major show of care for the park.

Located right on the state line between North Carolina and South Carolina, Carowinds treats the historical regions of the Carolinas as material fo lightly-themed and slightly-differentiated lands like Carolina Boardwalk, County Fair, and Blue Ridge Junction. In 2023, however, the park will lose one of its lands (the sparsely-themed Crossroads) in favor of Aeronautica Landing.

Billed as a celebration of the Carolinas' role in the birth of aviation (this is where the Wright Brothers made their famous flight, after all), Aeronautica Landing is a sort of post-modern testing grounds for new flight technologies. Absorbing the park's B&M inverted coaster (formerly Top Gun: The Jet Coaster, now called Afterburn but retaining its military flight decorations), the land will be a dynamic collection of cutting edge flat rides, family fare, and steampunk stylization. (See the fly-through video, above.)

The land will come stocked with existing rides (with the park's Dodgem bumper cars and Yo-Yo swings expected to remain with new wraps) and two new flat rides: the inverting Air Racers (a Zamperla Air Race) and the mesmerizing Gear Spin (a Zampera NebulaZ; the new hot flat ride for lots of parks due to its near-miss visuals that make it as fun to watch as to ride).

Plus, of course, the whole land will be decked out in steampunk props, aviation-themed midway games (sold as training opportunity for up-and-coming pilots), and vibrant colors and textures devised just to create a master-planned modern oasis in the park. It'll also contain Terminal A – a new eatery and bar. So even though thrill fans may clamor for coasters, think about what this land will bring! That's the power of these "smaller scale" projects and themed "lands" that add so much richness to a park, not to mention so much capacity. Aeronautica Landing will be an excellent new addition to Cedar Fair's lineup...