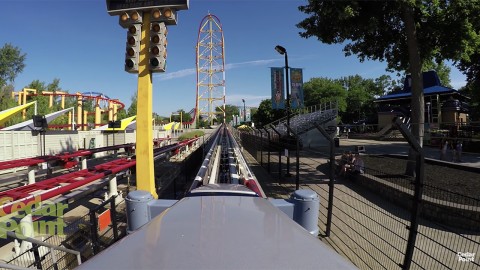 Arrow. B&M. Intamin. RMC. You don’t have to be around coaster enthusiasts too long before you start to know their names. Visit a few parks around the country and pretty soon, you’ll get to know their standards, too. From classic Arrow corkscrews to B&M’s four-across trains; Intamin’s intense launches to RMC’s converted woodies… These guys are the big names in the industry, and their varieties add spice to the amusement parks we love.

But have you ever wondered how each got its start? Though hundreds of coasters litter the country, surely one of them was the first Arrow… the first B&M… the first Intamin. Some of the most legendary manufacturers on Earth started big, with showstopping entries into the field. Others started small… like, really small. And today, we’re taking a whirlwind tour of seven of the most fabled modern coaster manufacturers to see how they got their start. Trust us: you might be surprised…

In so many ways, Arrow Dynamics (get it? Aerodynamics?) should be considered the founding father of the modern roller coaster. Nearly every major amusement park in the country contains at least one Arrow. That’s because Arrow sort of grew as the industry did. In the ‘60s, Arrow’s meandering mine trains spread around the nation; in the ‘70s, their Corkscrew and Double Loop models made unthinkable inversions industry-standard; in the ‘80s, multi-inversion “mega-loopers” that broke records; in the ‘90s, suspended, swinging coasters and airtime-packed hypercoasters…

To this day, some of the world’s most iconic “classic” coasters have been Arrows… think of the interlocked loops of Busch Gardens Williamsburg’s Loch Ness Monster or the same park’s beloved Lost Legend: Big Bad Wolf; Six Flags Great Adventure’s Great American Scream Machine; the world’s first 100-foot coaster (Gemini) and then the first’s first 200-foot coaster (Magnum XL-200) both at Cedar Point; and the wild ride that ultimately served as Arrow’s last, bankrupting the company, 2002’s X at Six Flags Magic Mountain.

For much of modern coaster history, Arrow practically stood alone as the solitary force behind steel coasters… and as its first coaster shows, there’s a reason for that.

Opened in 1959 as part of a radical expansion of Tomorrowland, Disneyland’s Matterhorn Bobsleds is actually made of two separate but intertwined roller coasters that independently slalom along narrow cliffs and interior caverns of the park’s 147-foot tall mountain (a 1/100 scale replica of the real Swiss peak).

A landmark in more ways than one, the Matterhorn wasn’t just the first thrill ride at Disneyland. It was also the world’s first modern, tubular-steel tracked roller coaster, and the first to use a complex computer system and block brake zones to safely operate more than one train on the course at a time. In other words, Arrow’s first coaster was also the first steel coaster as we know it, which pretty much puts it in “legend” status by default. Will every other major manufacturer be so lucky as to come out the gate with a landmark? Well…

There are few names as revered in modern coaster circles as Intamin, the Swiss manufacturer known for thinking outside the box. Intamin really rose to prominence in the ‘90s as a major player in the so-called “Coaster Wars,” experimenting with cutting edge (and occasionally, temperamental) launch systems and extreme maneuvers.

Rides like Superman: The Escape at Six Flags Magic Mountain pushed the boundaries of speed and stats, accelerating from 0 to 100 mph in under five seconds; Millennium Force shattered the 300-foot full circuit coaster record; and then, of course, Top Thrill Dragster opened as the world’s tallest, fastest, and only 400-foot tall coaster. Today, Intamin’s gradual evolution has created stunning, complex, and feisty rides like Maverick at Cedar Point, Taron at Phantasialand, Pantheon (above) at Busch Gardens Williamsburg, and the one-two punch of Hagrid’s Motorbike Adventure and VelociCoaster at Universal’s Islands of Adventure, each exemplifying the complexity, intensity, and headlining nature of Intamin’s hits. But their first…?

It turns out that before it burst onto the “Coaster Wars” scene, Intamin spent about two decades trading in “off-the-shelf” kiddie and family coasters for parks around the globe. It’s funny, then, that while Arrow opening the world’s first 100-foot-tall roller coaster (Cedar Point’s Gemini in 1978) little Intamin’s first coaster was its neighbor, the Junior Gemini. Topping out at 19 feet tall and reaching speeds of 6mph, you might not look at the ride (today called Wilderness Run) and recognize it as the progenitor of VelociCoaster… but that right there is Intamin #0001.

Engineers Walter Bolliger and Claude Mabillard actually worked for the supplier of Intamin’s designs – Giovanola – through the ‘80s before deciding to go it alone with their own engineering firm in the late ‘80s. It turns out that that was perfect timing for B&M to enter the “Coaster Wars” themselves. Perhaps owing to B&M’s popularity is their rides’ distinctiveness – signature four-across seating, rounded column supports, “pre-drops” at the top of lift hills… More to the point, whereas Intamin flirted with extremes, B&M is known for their trusty rides with high reliability and wide guest satisfaction – sometimes to a fault.

B&M inverted coasters (like Great America’s Batman: The Ride [above], Cedar Point’s Raptor, or Kings Island’s Banshee) were major fixtures of the Coaster Wars; then came a series of graceful, powerful, and headlining hypercoasters (Apollo’s Chariot at Busch Gardens, Diamondback at Kings Island, Nitro at Great Adventure) followed by a wave of 300-foot gigacoasters (Fury 325 at Carowinds, Orion at Kings Island, and Leviathan at Canada’s Wonderland)…

And so it goes for a generation of wing coasters (Gatekeeper, X-Flight, Thunderbird, Wild Eagle) and dive coasters (SheiKra, Griffon, Valravn) and flying coasters (Air, Manta, Superman: Ultimate Flight) and sitting coasters (Kumba, Wildfire, and Incredible Hulk), and basically, big, beautiful, reliable B&Ms are staples of any major thrill park’s lineup. So which of B&M’s beloved fan-favorites was their first ever ride?

Bolliger & Mabillard got their first job through networking, when the then-manager of Six Flags Great America (near Chicago) reached out and requested that the pair develop a new take on the stand-up roller coaster that had been such a hit through the ‘80s. The result was Iron Wolf. It’s wild and ironic that B&M – known for their graceful ride layouts, wide appeal, and smooth experiences – would get its start with a stand-up coaster, notorious in the industry for being rough, nauseating, and generally awful. And Iron Wolf was no exception!

Luckily, B&M returned to Great America two years later for Batman: The Ride – the first inverted coaster – and the rest is history… including several of its early stand-up installations. Though only 7 were ever built, 3 have been converted via new trains into sit-down coasters. That includes Iron Wolf, which was relocated to Six Flags America (in Maryland) as the aptly-named Apocalypse in 2012 before rising from the ashes via sit-down trains in 2019 as Firebird.