Netflixland? HBO World? Which Of These Parks Would YOU Love to Visit? 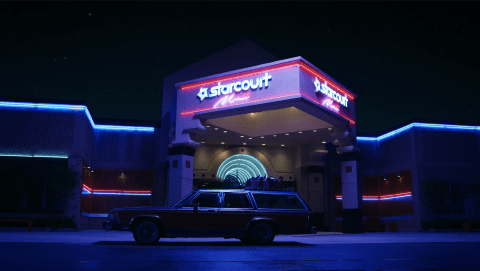 When it comes to intellectual property (IP), it’s tough to beat The Walt Disney Company. Not only does Disney have over a century of its own, homemade IPs and definitive fairytale adaptations to tout (everything from Mickey Mouse to Maleficent; The Little Mermaid to Mirabel) but decades of high profile, high-cost acquisitions have armed Disney with priceless character portfolios from ABC, The Muppets, Pixar, Marvel, Star Wars, and 20th Century. It all adds up to a roster of stories, characters, and brands that make Disney the one to beat in the “IP Wars” that power merchandising, streaming, and the box office.

But in the last few decades, Disney’s meteoric acquisitions have been seen and felt in their theme parks, too. Don’t misunderstand. We’re not huge fans of how Disney Parks have gone decades without original rides, or how the Parks seem to be “buckets” meant to collection from Disney + Pixar + Marvel + Star Wars instead of creating new stories all their own… But there’s no question that as a battlefront in the IP Wars, theme parks have become the newest places to see beloved, blockbuster stories come to life.

But they aren’t alone.

Take a look at the recently-opened Universal Studios Beijing, which borrows the “Islands of Adventure” layout, but stocks those “islands” with hot-off-the-presses, big-budget, high-earning franchises – lands themed to Transformers, Despicable Me, Jurassic World, Harry Potter, and Kung Fu Panda. You’ll also see it in studios eager to license their properties to newly-arisen parks across Asia and the Middle East, like Warner Bros. World Abu Dhabi.

And now, as the IP War’s battle of the theme park “Living Lands” rages on, it got us thinking… What other Studios could conceivably jump into the theme park game…? And what might we find there if they did?

THE STREAMING STORY: The OG of streaming giants has had its ups and ups and ups… and maybe now, some serious downs. From a DVD-by-mail service to its current place as the progenitor streaming service, Netflix is a behemoth. The service launched its first Original Series a decade ago. Even as shows like House of Cards and Orange is the New Black became serious hits (and even award-winners), Netflix Originals were still a rarity on the site… Today? Not so much. In 2021, the company reportedly spent over $5 billion on the creation of original content… which is expected to become more and more important to the service as Disney, Universal, Paramount, and Warner Discovery let licensing deals expire to return shows and films to their own streaming services.

As of 2022, Netflix has 221 million subscribers – the equivalent of the entire country of Brazil, and then some. For a time during the pandemic, Netflix’s market cap was higher than Disney’s, officially making this single streaming service “worth” more than the entire Walt Disney Company.

Not everything’s peachy, though. Once earning a reputation for “saving” shows that networks had given up on, the tables have turned and Netflix is now known for its brutal, ruthless cancellations of fan-favorite shows the second the algorithm turns on them… all while generating limitless amounts of unwatchable junk; “content for content’s sake.” Netflix took a huge hit this year when the service reported its first ever subscriber loss (a meager 200,000 – less than 1%), responding by instantly raising prices, cutting jobs, and canceling projects as it grappled with the first financial market indication that it wasn’t the only kid in town anymore. And with lots of competition, Netflix's share of the market (above) has steadily decreased.

IN THE PARK: The good news for Netflix is that its massive (and growing) portfolio of originals has some that instantly lend themselves to coming to life in a “Netflixland.”

Bridgerton may seem an odd choice for a theme park given that the scandalous series (from ABC primetime favorite Shonda Rimes – creator of Grey’s Anatomy, Scandal, and How To Get Away With Murder) is… well… best watched with headphones once the kids are asleep…

But aside from its steamy love scenes, Bridgerton actually brings to life a world that would be gorgeous to visit; a sort of super-saturated English countryside of cobblestone towns awash in ivy and lavender; great estates bathed in pastels; living walls, floral arrangements, pastries, tea gardens, and greenhouses. The whole thing reeks of fantasy and yet feels habitable – maybe a perfect place for a theme park to bring to life.

Netflix is also in the superhero game. The Umbrella Academy is based on the Dark Horse comic book series of the same name (created in part by Gerard Way of My Chemical Romance).

A sort of on-the-nose combination of X-Men and A Series of Unfortunate Events, the series follows a dysfunctional family of super-powered twenty-somethings who set off to avert the apocalypse… a few times. With seasons set in modern day as well as a Dallas of the 1960s, the show definitely lends itself to being a fourth-wall-breaking, stylish new entry in the “superhero land” genre.

Somehow, it was Netflix that funded The Dark Crystal: Age of Resistance – a sequel series to Jim Henson’s absolutely fascinating 1982 dark fantasy film The Dark Crystal.

Set in the high fantasy world of Thra, the series follows Gelflings who must unite their elemental clans to overthrow the evil Skeksis – reptilian overlords formed when the Crystal shattered a millennium ago. The settings, characters, and creatures of The Dark Crystal are as captivating as Lord of the Rings, Wizard of Oz, or The Chronicles of Narnia… to see this world – envisioned by Jim Henson and Frank Oz – come to life would be breathtaking.

Through a long-running partnership, Netflix was the streaming home for shows produced by DreamWorks Animation Television beginning in 2013. But in 2018, Netflix announced that they would begin producing their own animated features and shows via an in-house studio called Netflix Animation. The first film produced by the studio was Klaus – an origin story of Santa Claus set in a 19th century Norway.

Nominated for an Academy Award and sweeping the Annies, the film has earned universal critical acclaim for its gorgeous hand-drawn animation. It even beat the same year's Toy Story 4 to be named Animation Magazine's film of the year!

It's also not the only Netflix animated feature that would be a great choice for a theme park land. Released in October 2020, Over the Moon had all the makings of a modern animation masterpiece.

The film follows an adventurous young girl named Fei Fei who's inspired by her culture's stories of the moon goddess Chang'e to build a rocket to the moon. Notably, the film was directed by Glen Keane – Disney Legend known for being a lead animator on The Little Mermaid, Beauty and the Beast, Aladdin, Pocahontas, Tarzan, and Tangled, literally defining the style of the Disney Renaissance.

Ultimately, Over the Moon arguably proved to be a little uneven. A wonderful and enchanting first act ends with Fei Fei reaching the moon, only to find that... the moon goddess is a wannabe pop star with stellar backup dancers? It all wraps up meaningfully, and you can feel Keane's Disney touch throughout. But coming on the heels of Moana, Coco, and Frozen 2 it certainly feels like it just doesn't quite get to the moon. Regardless, both Fei Fei's Chinese village and the technicolor, Day-glo moon city of Lunaria beyond would make sensational environments for Netflixland...

Of course, there's zero doubt what the anchor land of Netflixland would be based on: Stranger Things is the runaway hit of Netflix's streaming lineup.

It's got everything the Netflix algorithm tells it to have: plucky pre-teen nerds, an '80s setting and soundtrack, monsters, powerful female heroes, sci-fi, and Winona Ryder. Set in the small town of Hawkins, Indiana, the series traces the results of a local lab's experiment that accidentally opens a portal into "The Upside Down," a dark, decomposing alternate Earth populated by dark interdimensional creatures.

Season after season, a group of local kids (lead by the telekinetic "Eleven") have to set down their Dungeons & Dragons and Kate Bush cassettes and face off against the increasingly-sentient creatures of the Upside Down, tackling new mysteries at every turn. With iconic locales throughout Hawkins (including the Starcourt Mall that serves as an '80s fever dream setting for all of season 3), memorable creatures (like the Demogorgon, Mind-Flayer, and Vecna), the highly-terrifying Upside Down that could serve as a great dark ride setting, and even in-universe food (hello, Scoops Ahoy and Eggo Waffles) it's practically tailor-made to be the centerpiece of Netflixland.

OTHER THINGS TO THINK ABOUT: Attractions based on Arrested Development? The Haunting of Hill House? The Witcher? Locke & Key? Squid Game?