MEOW WOLF: A Glimpse Into the Colorful, Creative, and Cosmic Future of Themed Entertainment Design 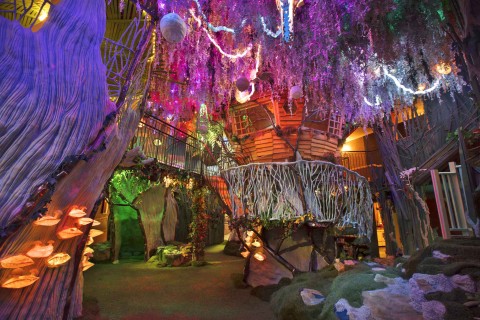 “Meow Wolf.” If you said it out loud a decade ago, you would probably have gotten a lot of concerned looks from family and friends.

Founded in 2008 as an artist collective lead by Matt King, Meow Wolf formed with the hopes of filling Santa Fe with alternative art and, eventually, constructing a music venue. (If it sounds like they randomly pulled two words out of a hat to form their name, that’s because that’s exactly what happened.) Several high profile art installations and shows (like 2011’s “Glitteropolis” cityscape, 2012’s “OmegaMart” fake grocery store, and 2013’s “Nucleotide” cave installation in Chicago) set the stage for Meow Wolf’s first permanent installation. And that’s where our tour begins…

But be warned: so much of Meow Wolf’s three permanent installations need to be experienced to be understood, and some of the quieter corners and hidden rooms in each are best left unspoiled… So if you intend to visit any of these locations, we’d recommend you tread lightly and avoid videos or walkthroughs of the experience. If you do press on in this feature, just know that we’ll share images of popular and well-documented aspects of each site and explore their basic stories and regions, but leave plenty to the imagination…

The first of Meow Wolf’s permanent installations resides in the collective’s home town of Santa Fe. One pretty continuous refrain you’ll hear about the New Mexican Meow Wolf site is that it really is the “Disneyland” of its genre – the first. Quite literally establishing the standards of the “immersive art experience” that’s been often duplicated since in increasingly-elaborate form, so much of this first Meow Wolf is almost charmingly understated and naive.

For example, you could pass right through Santa Fe’s Cerrillos Road business corridor without even knowing that a bucket list destination for themed entertainment fans is there. There’s no giant upside-down WonderWorks mansion. Instead, this first Meow Wolf is located in an abanadoned bowling alley (secured, in part, by a $2.7 million plege from George R. R. Martin – author of the Song of Ice and Fire fantasy series that was adapted into Game of Thrones) off the main strip. (The attraction’s sign even repurposes the former inhabitant’s – still shaped like a bowling pin.)

The only things that betray the otherworldly experience that resides inside are a number of gigantic art installations – like a spindly arachnid, a metallic coyote, and flower-sniffing robot – that are dropped down like landmarks in the parking lot.

Inside resides the ubiquitous box office, a small cafe, and a gift shop. But upon entering the installation – House of Eternal Return – you’re transported someplace very different.

Once inside, guests find themselves in the front lawn of a beautiful, two-story Victorian home in Mendicino, California. You can linger on the front porch. Look in through the windows. Listen for conversations between the neighbors through a fence. Search the mailbox for message sent to the Selig family and read it for your. Or, of course, you can head into the house. And that’s where things get weird.

Sure, this house has all the rooms you’d expect – a parlor, a study, a kitchen, bathroom, bedrooms, closests, and more – but something extraordinary is hidden inside. It turns out that this home was affected by something known only as the Anomoly – an inexplicable event that tore through the house, ripping open fractures in time and space and transforming the unassuming home of the Seligs into a multiversal crossroads.

You could spend hours pouring over the diaries of the Selig’s daughter; sifting through drawers; investigating puzzles, and exploring the connections within the house that ultimately establish an origin for the Anomoly, and motives for the shadowy governmental agency that’s placed the house in quarantine.

But for most guests to Meow Wolf, the path to discovery a lot less heady. It’s through the fridge.

Actually, dozens of unexpected breaks in the space-time continuum exist throughout the home. From room to room, folds in the fabric of existence create unusual sights and sounds. But more importantly, those wrinkles occasionally break into full on portals.

Crawling through the fireplace leads to a day-glo fish tank where you’re the fish. Shuffling through clothes in the childrens’ closet deposits guests into crystal caves where the glowing skeleton of a mammoth can be played like a xylophone; the fridge leads to the headquarters of interdimentional travel agency Portals Bermuda, which then links onward to secret gardens, ice stations, and deserts…

Even the laundry room has an unexpected connection to another world… it’s just inside the dryer, if you’re willing to climb in.

Eventually, nearly all of the mini-worlds within Meow Wolf lead to the Forest – a glowing, multi-story woods, spiral staircases, drawbridges, hidden habitats, living plants, and more. You can rest in its grassy hills, or ascend through the Forest’s illuminated canopy discovering ever more connections to new rooms, interactives, oddities, art pieces, and routes back into the house itself, unveiling unexpected links between our world and this one.

It would be easy for even the most avid explorers to miss an endlessly dark room lit only by an interactive laser harp; a black and white room decked out in the details of a 1920s Fleisher cartoon; dioramas of the Selig’s pet hamster, who’s been unexpectedly hurled into the comedy and chaos of the multiverse. Catch the “Wilderness” room alone and you’ll have a transcendental experience creating music in real time surrounded in geometric, stylized folded-paper animals.

At the furthest corners of the universe resides Fancy Town – a geometric cityscale that serves as the backdrop for concerts that use Meow Wolf as a venue.

The House of Eternal Return literally unfolds into increasingly elaborate, trippy, and otherworldly environments. The torus-shaped Timeworm (a sort of spaceship-esque room for relaxation); a vertical school bus to recline in; infinity rooms… even those who try to get to every nook and cranny are certain to find evidence online of rooms they never knew existed… It takes hours to absorb it all, and we’re intentionally going light on detail and imagery to preserve this experience for you.

And as evidence of just how wonderfully original, creative, and thoughtful Meow Wolf is, strong-willed are the few themed entertainment design fans who can make it through the exist gift shop without picking up a $3 copy of the “Mendo Mercury” – an entirely fabricated but immensely world-building fictional Mendocino newspaper whose stories expound on the mythology of the Anomoly and its effects on northern California. Talk about an in-house IP and world-building lore.

It goes without saying that in a post-Wizarding-World industry, increasingly immersive experiences are all the rage. But what Meow Wolf did with its 2016 House of Eternal Return installation is something new entirely… Truly, an artist collective, with various creators coming together to build dissimilar worlds connected by one overarching narrative. This is something different than what we’d seen before: a wholly original, fully-enveloping universe designed by free reign artists, powered by the local community, and explored at will. Mind-expanding, family-friendly, and heartfelt, Meow Wolf’s first permanent installation carved out a new niche in themed entertainment… all inside of an old bowling alley.

And in the same way that Disneyland “invented” the standards we hold modern theme parks to and inspired increasingly-ambitious spin-offs, the beautifully limited, charmingly naive, and lovingly developed House of Eternal Return went on to inspire two other permanent Meow Wolf installations with entirely different settings and storylines… Read on…