Spooky Universal: Have you heard these Creepy Legends? 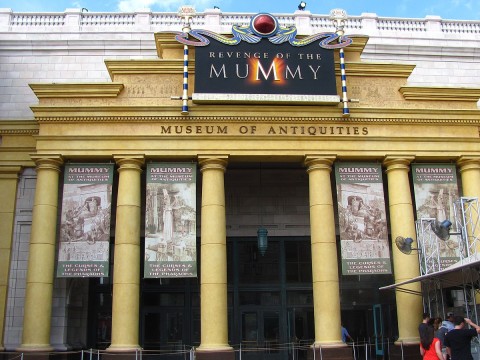 Unlike Disney theme parks and their abundance of urban legends and ghost stories, Universal does not have quite the same track record. Despite hosting one of the most frightening theme park Halloween events year after year, few Universal ghost stories have spread past a handful of park employees, individual guest experiences, and unsettling (though likely unfounded) rumors.

Despite this, the Halloween spirit does not always skip over Universal parks! Here is a collection of spooky stories and rumors surrounding the parks to quench your thirst for the creepy and unknown!

Starting off in Universal Studios Orlando with a not-so-unexplained but still plenty creepy rumor that has been circulating on the internet for quite some time is the discussion around the gorilla animatronics from the original King Kong attraction, Kongfrontation. For those unfamiliar, Kongfrontation was an opening day attraction at the park that made use of sky tram style vehicles.

The ride was closed to make room for the Revenge of the Mummy rollercoaster that opened in 2004. Despite the differences in plot and ride style, the rides utilized the same building space, and because of this, some people speculate that the Mummy is also used to store leftover props and pieces from the original Kongfrontation ride. Most notably is the idea that one of the King Kong animatronics' heads is stored beneath the Mummy's launch hill, hidden in the darkness. Is this true? Probably not, but it sure is creepy to imagine a giant gorilla head staring at you from the pitch black as you cruise right over without ever realizing it's there.

Right down the street is the second attraction with a creepy legend surrounding it--the former site of the Shrek 4-D theater and attraction. Before the green ogre settled into the swamps of Central Florida, the building once played host to an attraction dedicated to Alfred Hitchcock called the Art of Making Movies. Alfred Hitchcock is famous for creating iconic films such as Psycho (1960), The Birds (1963), Vertigo (1958), and Rear Window (1954), and the legendary filmmaker's spirit is still said to inhabit the building long after his death and the transformation of his attraction. Staff report lights turning on and off, doors shutting, unexplained thumps, and animatronics sputtering to life randomly.

The third story comes from a personal experience I had during one of my trips to the Universal Orlando Resort. I was single-riding Revenge of the Mummy and was seating inside a car full of strangers. I noticed a man in a bright orange shirt get into the row directly behind me and take a seat. I remember that he stood out to me because of how distinct and vibrant the color of his shirt was, even in the dim light of the queue. The ride began and progressed as usual, with no unusual hiccups or issues, but when I stood from my seat to exit at the end, I noticed that there was not a single passenger in the car that wore a bright orange shirt. He could not have exited before me and I simply missed him, and he had definitely been there at the start of the ride. To this day, it's a story that continues to puzzle me but it's a great story to share amongst friends. Keep an eye out next time you're seated with strangers on Revenge of the Mummy, and let me know if you ever see the elusive man in a bright orange shirt.

If none of these stories or legends creep you out enough, I recommend stopping by the bathrooms in Hogsmeade--there, you can hear the voice of a reliable ghost... Moaning Myrtle! If you have never been taunted by a ghostly girl while emptying your bladder, can you truly call yourself a fan of Universal?

Although the Universal parks don't have a lot of famously haunted locations on the property, there are dozens of employee and guest experiences shared around the internet to keep your interest piqued. Surely it's only a matter of time before new ones are uncovered. Until then, what's the creepiest paranormal encounter you've ever had at a theme park?