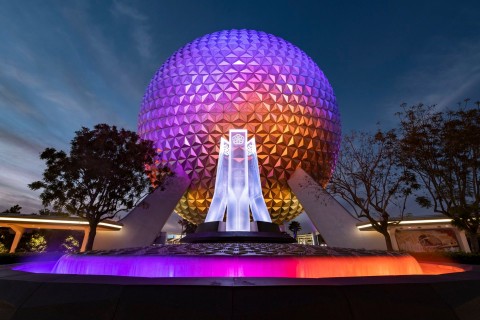 Whether you first visited EPCOT in the ’80s, ’90s, 2000s, or 2010s, a trip to the park today would tell you that EPCOT’s story has been a complex one. EPCOT is a park rooted in the past and perpetually tasked by the present to envision a future we now inhabit. At nearly every step of its life, it’s battled between what it was, is, and could be. Somewhere between being hopelessly retro and hopelessly futuristic, the park has been the subject of fan debate for decades, even as piecemeal updates, changes, replacements, and character injections have tried to balance EPCOT’s thrills, entertainment, and family appeal.

We all know that in 2019, Disney officially launched a California-Adventure-sized reimagining of EPCOT, committing billions of dollars and at least a half-decade of focused attention to Walt Disney World’s second gate. It’s unlikely than any singular vision for EPCOT could ever balance the whims of fans who recall its intellectually ambitious origin, executives who have long detested its lack of character, and guests who have long been caught between the park’s competing identities.

And yep, true to form, EPCOT’s all-at-once reimagining has all the highs and lows you’d expect of modern Imagineering… especially thanks to the interruption of COVID-19, which has seen plenty of projects announced back in 2019 get sidelined, go silent, or get swept off the schedule altogether. Even if no park deserved a complete master plan more than EPCOT, there’s no denying that a whole lot is still happening that’ll reinvent this park once more…

So here we stand, 40 years out from EPCOT’s opening. Aside from assorted merchandise and the #EPCOT40 logo, Disney didn’t have much prepared to celebrate this legendary park’s landmark anniverary… and with half of its north end comprised of construction walls and dirt piles, that’s probably fair. But with EPCOT in the midst of metamorphosis, one thing we can use its 40th anniversary for is to reflect on 6 elements of the “classic” EPCOT you can still find in the park today, and how each is so permanently tied to what the park was, is, and could be…

EPCOT simply wouldn’t be EPCOT without its architecture. Whereas most Disney Parks go to great lengths to transport you to new, timeless, and sometimes impossible environments, EPCOT plays by its own rules. Famously, the park was envisioned as a permanent “World’s Fair,” and true to that M.O., guests stroll through its “neighborhoods” as they might a campus. In keeping with that “World’s Fair” ethos, the organizing principle of the park is its “pavilions.”

Thanks to the era in which they were designed and assembled (the late ’70s and early ’80s), EPCOT’s physical pavilions are quintessentially retro. We’re talking about monumental architecture; lots of beige and pastel; brutalist concrete; large geometric forms. Some are imposing. Some endearing. Some natural forms. Some artificial. EPCOT looks more like downtown Akron than Magic Kingdom.

And EPCOT’s ’80s DNA is literally baked into those pavilions. The average guests might not be able to guess when Magic Kingdom or Hollywood Studios or Animal Kingdom was designed based on their architecture, but EPCOT? EPCOT was a product of the ’70s and ’80s. Period.

That would be fine except that – like clockwork! – the public’s taste for the style of the ’80s fell sharply as the decade itself passed into the rear view mirror. In the ’90s, Disney went to great lengths to try to mask EPCOT’s inherent ’80s-ness, grafting EPCOT in bold primary colors, Disney Renaissance films, and Memphis patterns (which, by the way, aged just as terribly heading into the 2000s… sort of a never-ending lesson in the futility of keeping a park “timely” to the design tastes of the present.)

As luck would have it, enough time has passed that elements of the ’70s and ’80s are back en vogue. One step at a time, Disney’s Tomorrowlands are reverting to the Space Age aesthetic they sported in the real Space Age. Likewise, EPCOT’s reimagining is clearly embracing the park’s ’80s ingredients – albeit, modernized and stylized. The result is a park that leans into its now-retro-cool foundation through architecture, color, and 2D design while mixing in flourishes of the 2020s, like wood, steel, greenery, and glass.

EPCOT will always look like a product of the ’80s, because it is. All designers can hope is that the architecture of the era remains nostalgic and retro-cool going forward, and that their 21st century accents turn out to be timeless this time around.

One quintessential element of the “World’s Fair” formula has always been the presence of an icon – a clear, centering structure serving as the symbol of the Fair (and often, left behind once the Fair itself closes). Everything from Seattle’s Space Needle to New York’s Unisphere; San Francisco’s Palace of Fine Arts to Paris’ Eiffel Tower were all built for and have each had starring roles in the imagery of its respective city’s hosted expos. So naturally, EPCOT has one, too…

Whether it’s known as “the EPCOT ball,” “the golf ball,” or its true name, “Spaceship Earth,” EPCOT’s icon really does hold its own with the best of ’em. Designed by Wallace Floyd Design Group with the assistance of science fiction writer Ray Bradbury, Spaceship Earth is a 180 foot tall geodesic sphere supported by three legs. Named for a concept developed by architect Buckminster Fuller, Spaceship Earth beautifully captures the sort of architectural, scientific, and progressive ambitions of Future World while echoing the unity and globalism of World Showcase – in other words, a perfect centering icon for the park.

Even though Spaceship Earth is the park’s icon, it was also designed as a pavilion in its own right. In EPCOT’s original organizing scheme, each pavilion of Future World was dedicated to a single area of science and industry (with the Lost Legend: Horizons then serving as a capstone attraction combining them all). Spaceship Earth’s focus was communication, housing an eponymous dark ride that traveled through time from the earliest primitive humans to the future.

That ride has gone through three substantial re-writes, totalling four definitively different versions marked by different narrators. The current version (narrated by Dame Judy Dench) is the longest-lived, having launched in 2008. But a fifth version announced in 2019 (and then delayed or cancelled by COVID-19) intends to shift the ride’s focus from communication to the much more franchise-friendly topic of “storytelling,” weaving (hopefully subtle) nods to Disney films into the attraction.

So even if it’s been reimagined here and there, Spaceship Earth is the “last man standing” when it comes to EPCOT’s lengthy, informative dark rides of olde. And the structure itself – truly a globally-recognized architectural landmark –  shines even more brightly as an iconic structure thanks to the “Beacons of Magic” lighting package that launched alongside Walt Disney Word’s 50th Anniversary celebration in 2021.