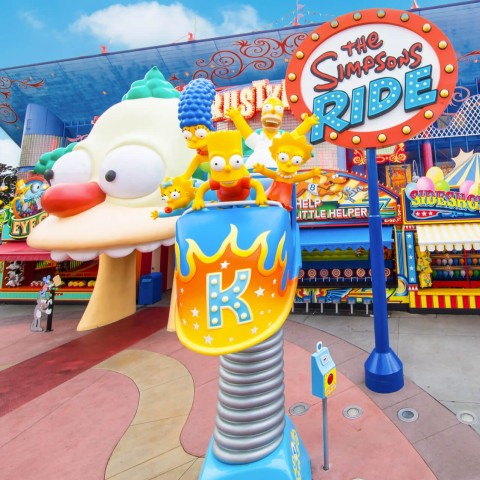 Motion-induced sickness can be a huge pain, especially for those thrill-seekers who want to experience all that a theme park has to offer but hate running the risk of needing to tap out for the next few hours. An unexpected bout of motion sickness can quickly and easily ruin your day in the parks, as you’re left with that dull headache and churning stomach that even a good dose of Dramamine can’t shift.

In order to make the most of your day within Universal Orlando it can be incredibly useful to know which rides are most likely to make you feel a little woozy so you can judge for yourself whether you’re best to avoid them so as not to spoil the rest of your day. While its always recommended to read each ride’s individual warning signs prior to boarding, here are some of the biggest motion-sickness culprits to watch out for when visiting both Universal Studios and Islands of Adventure.

An attraction that could lead it’s own motion-sickness masterclass, the Simpsons Ride is one of Universal's more intense screen-based motion-simulator attractions. This ride is more-than-likely to turn your stomach and leave you with a sore head afterwards as your vehicle bumps and jolts along with an on-screen rollercoaster simulation.

Another of Universal’s motion-simulators, however, this one uses a mix of practical and screen-based effects as you physically move from scene to scene, similar to Islands of Adventure’s Spider-Man ride. 3D glasses are also worn throughout the attraction which can sometimes add to the nausea.

3. Harry Potter and the Escape from Gringotts

An indoor coaster that features a fairly significant drop, as well as a number of spins which are accompanied by screen elements that the coaster interacts with. Escape from Gringotts also requires 3D glasses. (However, be sure to wander through the queue for this attraction and exit before riding as the theming inside is not to be missed!)

Another motion simulator, although this one is considered to be somewhat milder and seems to spark a different reaction from person-to-person. Minions is a theater style attraction in which your seats tilt and move with the on-screen video. Stationary seating is available if you’re looking for a way to experience the attraction but wish to lower the risk of feeling ill.

A similar format to Despicable Me in that it's a theater style motion-simulator. The ride simulates an action-packed (and not-so-smooth) car race, however, unlike Minion Mayhem, this one requires 3D glasses. Milder in comparison to the likes of the Simpsons ride, but does not offer a stationary seating option.

A shooter attraction that may seem relatively tame at first glance, however, guests run the risk of a dramatic spinning sequence towards the end when a shoot-out gives riders a chance to send the ride vehicle running opposite them into a spin.

As mentioned before, motion-sickness triggers can differ from person to person, but outside of your typical rides, Hollywood’s Rip Ride Rockit & Revenge of the Mummy are the two most intense coasters on the Universal Studios side. While they may not go upside down, both rides feature a variety of high-speed twists and turns. Rip Ride Rockit also boasts a 90-degree climb into a steep drop, while Revenge of the Mummy sees you propelled backwards for a brief sequence.

So that's Universal Studios Florida but how about Universal's Islands of Adventure...