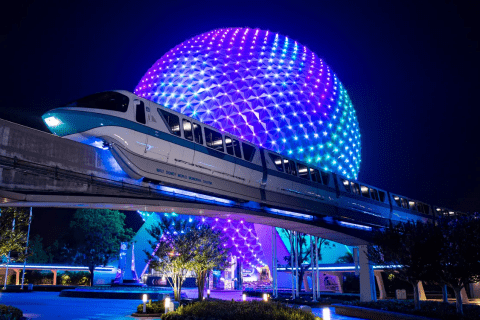 With so many perks Walt Disney World has to offer while staying on property, it can be hard to choose your favorite. However, mine would definitely be all of the different transportation options they have to choose from. For me, it's almost like a whole other ride in itself.

Let's breakdown all of the ways you can get around Walt Disney World, for FREE!

The buses are probably the most popular and well known way to get from your resort to the four parks on property, as well as to all of the other Walt Disney World resorts, Disney Springs and their two water parks; Typhoon Lagoon and Blizzard Beach.

Granted, yes, the buses are the most crowded out of all of the transportation Disney provides, but it is also the most efficient and are offered everywhere on property. With buses running every 15-20 minutes to each park as well as running both the earliest and latest out of all of the transportation offered, you can always count on them to get you to where you need to be.

The bus stations can be found at the front of each resort and park entrance with signs designating which bus is going to where, as well as when the next one will arrive when heading out from a resort. The bus system is my least favorite option because of how packed they can get. However, you can always count on it in a pinch.

The monorail is the next well known mode of transportation at Walt Disney World and maybe the most loved by both kids and adults. It is also my second favorite way to get around.

Although the monorail only connects to specific locations, it is a great place to cool off in the air conditioning and relax. The monorail is very much like a train, just a little faster and above the ground. It connects to the three Magic Kingdom resorts; The Grand Floridian, The Polynesian and The Contemporary as well as Magic Kingdom and EPCOT.

The monorail has two separate lines. The express and EPCOT line, which only goes between the Ticket and Transportation Center (aka the TTC), Magic Kingdom and EPCOT. Then the Walt Disney World monorail line supplies access to Magic Kingdom, the TTC, and the three Magic Kingdom deluxe resorts that I noted above. The Magic Kingdom station can be found just outside the entrance to the right if you are looking onto Bay Lake. The Polynesian and Grand Floridan stations are located just outside the second floor hotel entrances while The Contemporary station picks up and drops off right inside the hotel itself!

Hi! My name is Jessica, a wife and mom of 4 who has been going to Disney World ever since my first trip at 4 years old.
Disney is a positive place in the world for me to help cope with my mental health struggles. I love everything about Disney, from the rides, to the merchandise, to the food, and all the way down to the smells, smiles and feeling of joy and peace it brings! I hope to continue living my best life with Disney as the forefront for many more years to come and sharing all it means to me and my family with all of you.

This article has several mistakes. The Skyliner gondolas are not air conditioned. Also the Friendship Boats are the ones in Crescent Lake connecting Epcot, Hollywood Studios, and the surrounding resorts.