DE-SPARKED: 3 Legendary Coasters That Lost Their Most Iconic Features Forever 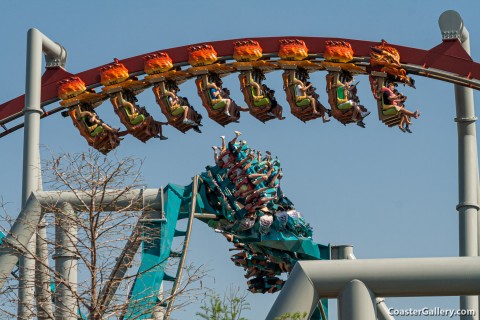 Roller coasters come in all shapes, sizes, seating arrangements, and styles... But the best coasters – the ones that people remember – always have something extra. A "secret sauce";  a "spark" that makes them memorable, interesting, and unique. From launches to inversions; freefall drops to dark ride sections; switch tracks to broken records, those "sparks" are special. So what happens when they disappear?

Today, we've collected a list of three iconic, landmark coasters... that all lost just a bit of their "spark" when a major change saw the end of an era... Though these rides will forever be icons in the story of roller coasterdom and the minds of thrill ride enthusiasts, their tales always come with a caveat about the "thing" that went missing from each...

Did you get to experience any of these three rides? Before or after their "spark" was dulled? Let us know in the comments below...

Perhaps the most infamous roller coaster of all time, SON OF BEAST was a herald the new millennium... and maybe, an apex of the Coaster Wars. Given that Kings Island in Cincinnati, Ohio was still under the banner of movie giant Paramount, it's appropriate that 2000 saw the opening of a "sequel" to the park's legendary wooden coaster The Beast. And like any good sequel, this one was bigger, louder, and more explosive.

Located just a few hours' drive from Cedar Point – where, the very same summer, 2000's Millennium Force had shattered the once-thinkable 300-foot height barrier – SON OF BEAST opened as the world's tallest, fastest, and second-longest (leaving the record to its father) wooden roller coaster... the first (and still to this day, only) wooden "hypercoaster" cresting a 200-foot drop.

But Son of Beast's real claim to fame was, of course, being the only looping wooden coaster on Earth, sporting a 118-foot tall vertical loop. We explored the full story of the ride in its own in-depth feature – Lost Legends: Son of Beast – and boy is a wild story. Plagued with issues during its construction, Son of Beast was viscious; a highly-turbulent, physically violent, incredibly intense attraction...

In 2006, an accident on the ride sent a train of riders to the hospital. As a result, the six year old attraction was closed for the rest of the season. When it re-opened in 2007, it sported new, lighter-weight trains... and no loop. Despite having nothing to do with the accident, he iconic element had been removed in order to allow lighter weight trains that would leave less wear and tear on the massive wooden structure.

SON OF BEAST roared on, but its diminished reputation, ultra-rough ride, and lost loop clearly took its toll on the ride's popularity. In 2009, a reported guest injury lead to the ride's second extended closure. Though the park was okayed to re-open it, they didn't. Son of Beast was standing but not operating for three years. It was finally felled in 2012. Today, the B&M inverted coaster Banshee takes up just a portion of its once-sprawling real estate, and an "eternal flame" for Son of Beast burns in the new ride's cemetery-themed queue.

When Universal's Islands of Adventure opened in 1999, the park was billed as "the most technologically advanced theme park on Earth." It made sense. After all, with incredible Modern Marvels: The Amazing Adventures of Spider-Man, Poseidon's Fury, and Jurassic Park River Adventure, Universal's first studio-free theme park really was an incredible showcase of technologies and immersive theming fused together.

But one of the park's biggest anchors was Dueling Dragons, a pair of intertwined B&M inverted coasters. Though "bare, steel coasters" might've been somewhat out of place in the otherwise immersive park, Dueling Dragons at least had a great hook. The blazing red and blue tracks – "Fire" and "Ice" respectively – were each entirely separate rides with completely different layouts and elements... but at three key moments along the rides' course, the two coasters charged at one another in near-miss aerial clashes.

In one moment, the two corkscrewed around each other; in another, "Fire" soared over an airtime hill while "Ice" flipped upside down beneath them; and in the ride's most iconic, the two trains raced headlong for eachother, "pulling up" at the last second into vertical loops, with riders' feet coming within 18 inches of each other.

It was all made possible by a ride control system that weighed each train in the load area, then precisely calculated the lift hill speed and trim brakes throughout the rides' courses, ensuring that the two would meet in a perfectly synchronized battle.

In 2010, the Lost Legend: The Lost Continent was conquered, making way for the Wizarding World of Harry Potter. The blazing steel coasters didn't exactly fit with otherwise-immersive village of Hogsmeade, but hey, scrapping a $40 million anchor attraction didn't make much sense. The ride's name was changed to "Dragon Challenge," lightly themed to Harry Potter and the Goblet of Fire.

It's lucky that Potter's arrival led to the ride's renaming, because in 2011, loose articles flung between the trains at their "near miss" moments lead to two serious injuries on the ride. Instead of "dueling," the coasters began to operate independently, at best "chasing" one another through the course. In October of that year, Universal made it official that the dragons would never "duel" again.

Obviously, the loss of their "spark" resulted in a reduction in the ride's popularity. In 2017, Universal announced that Dragon Challenge would close forever that September. (To date, they're the only B&M coaster to ever be permanently removed.) In 2019, Hagrid's Magical Creatures Motorbike Adventure opened in their former space. Hagrid's is a great ride in its own right... but it's also a better fit for the Wizarding World of Harry Potter than Dragon Challenge ever could've been.

Do you remember The Racer at Kings Island?

Great article on these coasters. While ours is nowhere the 'BIGNESS' of what's happened to these coasters, COASTER in Playland(PNE) in Vancouver, Canada has gone through a Major Change recently, after over two years of renovating etc. The trouble now is ... they added SEAT BELTS to it. After 64 years of no injuries or deaths, they put seat belts on it now? Apparently this was ordered by a new Safety Official who inspected Coaster after all the renovation was completed ... for "further ongoing safety" I was told. Bleah. Obviously this Official doesn't ride coasters. And I don't know if I'll ever ride Coaster again in this new fashion. So far, in two visits to the park (second time during our annual fair, The PNE, Sept.01) Coaster wasn't open the first visit (July 31), and on the second, the queue was nearly two hours long to get a two minute ride on Coaster. With seat belts. Double bleah.