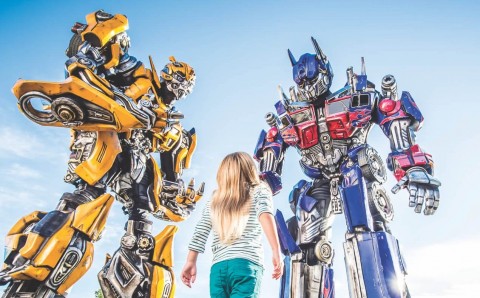 For many, meet and greets are an integral part of the theme park experience, allowing guests to interact with their favorite characters and pose for that all-important picture. Universal Orlando already boasts their own impressive lineup of unique and wonderful characters that guests are able to meet, but there are a handful of other characters that have yet to make their in-park appearance.

So, whether you usually make a bee-line to meet Optimus Prime immediately as you enter the park gates, or whether you prefer some casual character spotting throughout the day, here are six characters that we would love to see make their meet and greet debut over in Universal Studios and Islands of Adventure.

1. Toothless and Hiccup (How to Train Your Dragon)

In competition for potentially THE cutest meet and greet of all time, giving guests the opportunity to meet the loveable (and not to mention legendary) Night Fury in person would likely make for an incredibly popular addition to the parks. And who better to accompany him than his faithful best-friend Hiccup, who could certainly teach you a thing or two about his various pursuits in dragon training.

Not only would this be the perfect meet and greet for those who have been desperate to see How To Train Your Dragon represented in the parks in some form, but given that Toothless is undeniably one of Dreamwork’s cutest characters, imagine the downright adorable photos you would leave with!

With Frankenstein and Bride of Frankenstein currently meeting and greeting over in Universal Studios Hollywood, it’s time to bring the entire gang over to Universal Orlando! Universal look set to continue building on their Classic Monsters’ in-park presence at this year’s Halloween Horror Nights event, with a particular focus on The Mummy, Wolfman, and Dracula.

Horror fans would leap at the chance to get their spook on with these beloved Horror icons, but even the more casual parks fans would enjoy interacting with these instantly recognizable film legends. Plus, with Universal currently rumored to be bringing an entire Classic Monsters themed-land to their new Epic Universe park, why not begin getting park-goers acquainted with them in preparation for park opening? (Plus, it would help fill the Monsters Cafe-shaped hole in all of our hearts...)

Another contender for the cutest meet-and-greet, although this one would absolutely depend on the execution as a real-life E.T. has the potential to be borderline horrifying. It almost seems to be somewhat of a missed opportunity to not give visitors the chance to meet everyone's favorite alien after they disembark from E.T’s Adventure (aside from the gift shop’s photo-op which uses a stand-in.) Much like the ride itself does, a chance to meet E.T. would offer a welcome blast of nostalgia for lovers of Spielberg’s beloved extra terrestrial and truly round off the ride experience.

Chris Pratt and Bryce Dallas Howard may be the real-life stars of the Jurassic World franchise, but their characters Owen and Claire with their old-married-couple dynamic would certainly entertain fans while visiting the Jurassic Park area. While Owen could share some tales of his raptor-training days, Claire might even be able to let you in on some of the previously classified secrets that surround the Jurassic World park. With a number of heart-pounding adventures under their belts, most recently in this summer’s Jurassic World Dominion, these two dino experts would make a great addition to the parks.

Just as Doc Brown gets the very, very occasional assist from Marty McFly on overly crowded days, an appearance from Lydia Deetz alongside Beetlejuice would likely lead to some very fun interactions. This strange and unusual character could meet guests in any one of her iconic costumes from the movie and accompany the ghost with the most on his daily wanderings around the park - making for an extra special photo op for those who are fans of the dark and whimsical 80s comedy.

The Ghostbusters are technically more of an honorable mention as these guys previously had a considerable presence in Universal Studios back in the 90s which, at the time, also gave guests the opportunity to meet them. However, despite having perhaps already had their heyday within the parks, there is certainly a case to be made for reinstating that old contract and bringing them back to greet park-goers - especially as Universal continues to lean into their more nostalgic elements and properties, such as with their latest Tribute Store overlay. Guests would delight in listening to tales of some of the Ghostbusters' ghoulish encounters, as well as getting to hear some of their iconic quotes.

Which of these characters would you most like to meet? Who do you think Universal Orlando should bring to the parks next? Let us know by voting in our poll below or by leaving us a comment.