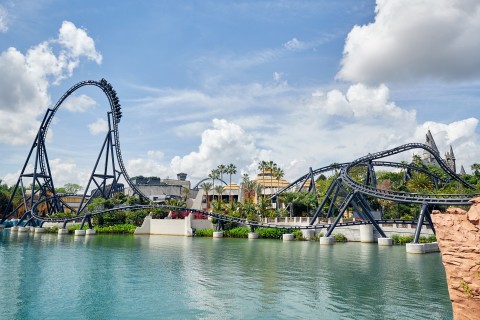 During our SCRAPPED series, we have explored the different Walt Disney World attractions and resort hotels that sadly never came to be. This time we are going to journey over to Universal Studios and Islands of Adventure to see what might have been, but we are going to do things a little differently. Back in 2014, Theme Park Tourist published an article going over 18 attractions at Universal Studios Florida and Islands of Adventure that never came to fruition. We are going to re-evaluate that list and see which attractions have seen new life and which attractions are still just what-ifs 8 years later. You can read the original article here.

Before Marvel Super Hero Island came to be, there were earlier plans to incorporate a Batman-themed land called Gotham Island into what was originally going to be Cartoon World (the original concept for Islands of Adventure). The immersive land would have included many rides themed around the caped crusader including the Batjets suspended coaster, Joker’s Madhouse wild mouse coaster, a Batcar dark ride, and even the iconic Batcave.

Unfortunately, it came down to money when Universal was negotiating with Warner Bros. to obtain the rights to the DC characters and Looney Tunes and Universal reportedly wasn’t offering enough so the plans fell through. The rights to those characters eventually landed with Six Flags and you can now find several Batman-themed rides across all their parks.

This family coaster would have been incorporated into what is now Toon Lagoon. Not much else is known, other than it would have been themed around Rocky from Rocky and Bullwinkle.

It is rumored that Universal originally wanted to incorporate the famous Simpson family in Islands of Adventure rather than Universal Studios where they now reside. However, at the time the park was being developed, Universal was unable to obtain the rights to use the characters. This incorporation into Islands of Adventure would have included a simulator ride adventure where guests would board Otto’s school bus. We later got a different iterations of a simulator ride with The Simpsons Ride.

Around the time when Islands of Adventure was getting ready to open, Universal wanted to open a new attraction at the original park so that guests would still be drawn to Universal Studios too. Several ideas were floated, a few of which we will touch on later. One concept was a Simpsons dark ride. This would have seen the family taking a trip to Orlando and would have featured satirical depictions of many of the local parks and tourist spots. The ride they chose to build at the time ended up being Men in Black: Alien Attack and of course we got a whole Simpsons land several years later.

Another attraction that was considered to draw people to Universal Studios was the Apollo 13 roller coaster. Allegedly, Universal liked the idea of a coaster because Islands of Adventure was set to feature three, Dueling Dragons and The Incredible Hulk. The indoor coaster would have been housed in a replica of the Kennedy Space Center Vehicle Assembly building. They also considered a disaster concept for the coaster but ultimately, it never came to be. The disaster concept was utilized in the retheming of the Earthquake attraction when it became Disaster! A Major Motion Picture Ride…Starring YOU, which is sadly now closed.

The Helicoptours was meant to be a simulator ride that reportedly would have introduced technology similar to Disney’s Soarin', but before Soarin’ even opened. During a tour of the dinosaur-infested land, riders would have been attacked by Pteranodons.

This was supposedly going to be just like the movie where guests are taken on a tour of Jurassic Park and encounter dinosaurs along the way. It was decided that the ride was too similar to the already in-development River Adventure. It’s interesting to note, that Jurassic Park River Adventure was originally intended to be built in Universal Studios. but once the development of a new park began, they decided to move it to the new park and incorporate a whole themed land. In fact, including the Jurassic Park-themed land is rumored to be a big reason why the Cartoon World concept was scrapped.